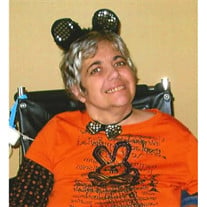 Kelly Ann Townsend McDonough, age 45, of Lake Park, passed away Sunday afternoon April 21, 2013 at the Lake Park Care Center. She was born May 24, 1967 at Fort Dodge, Iowa to Craig and Sheila (Robinson) Townsend. Kelly graduated from Ocean View High School in Huntington Beach, California in 1985 and attended Golden West Community College in Huntington, California. Following her education, Kelly was a receptionist and her last employment was with the Department of Motor Vehicles. Kelly enjoyed riding her bike, theatre, and speech, where she earned a second place finish in the California State Speech and Theatre competition. Kelly is survived by her daughter, Sarah Scardino and her husband Zach and their two children, Cara and Anthony of Spring, Texas; a son, Stephen McDonough of Houston, Texas; her mother, Sheila Robinson and her husband Jerry of Spirit Lake; and a brother, Paul Townsend and his wife Cathy of Corona, California. Kelly was preceded in death by her father, Craig Townsend; brother, Lane Townsend; and her grandparents. A memorial service will be held at 10:00A.M. Friday, April 26, 2013, at the Schuchert Funeral Home in Spirit Lake.

The family of Kelly Townsend-McDonough created this Life Tributes page to make it easy to share your memories.

Send flowers to the Townsend-McDonough family.