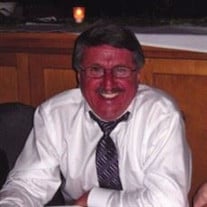 LaDon "Mac" H. McClintic, age 64, of Spirit Lake, passed away Tuesday, October 28, 2014, in Sioux Falls, South Dakota. He was born on June 6, 1950, in Schaller, Iowa, to Harry and Thelma (Blum) McClintic. Mac graduated from Schaller High School in 1968, and then enlisted to serve his country in the United States Air Force from 1968 until 1972. Mac returned from the service and worked numerous jobs in sales, which he made his career. He was currently working for Landmark Products Incorporated, where he was employed in food sales. He and Jeanette Gerth spent the last 20 years together sharing each other's families and were engaged to be married on 12-13-14. Mac was a member of the V.F.W., the American Legion and the Moose Lodge. He served as the 54th president of the Minnesota Jaycees in 1985-1986. Mac's true passion was the time he spent with his family and friends, especially his grandchildren! He also enjoyed cheering on the Iowa Hawkeyes, leisure travel, golfing, spending time on and around the lakes, and reading. Mac is survived by Jeanette Gerth of Rogers, MN; children, Kendra Randel of Blaine, MN, and Devin McClintic (Heidi) of St. Michael, MN; three step-daughters, Janelle Bastian (Stewart) of Grand Rapids, MN, Kristi Carlson (Matt) of Maple Grove, MN, and Jodi Cook (Eric) of Rosemount, MN; ten grandchildren, Aidan, Austin, Devin James "DJ", Jaxon, Annika, Natalie, Beckett, Parker, Cali and Cade; and seven siblings, Dennis McClintic (Pat) of Dewitt, IA, Melvin McClintic (Vicki) of Glenwood, IA, Roma Lorenzen, (Jim) of Linn Grove, IA, Diane Peters of Sheldon, IA, Ron McClintic (Julie) of Schaller, IA, Curt McClintic (Amber) of Sheldon, IA, Michelle Jensen (Randy) of Sioux City, IA, and many nieces and nephews. He was preceded in death by his parents; and a brother, Keith McClintic. A funeral Mass will be held at 11:00A.M. Saturday, November 1, 2014, at St. Joseph's Catholic Church in Milford, IA. Visitation will be held Friday, from 4:00P.M. until 7:00P.M. at the Schuchert-Lentz Funeral Home in Spirit Lake, IA. GO HAWKS!!

The family of LaDon Mac McClintic created this Life Tributes page to make it easy to share your memories.

Send flowers to the McClintic family.