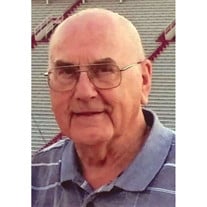 Larry was born in Richmond, CA during the Great Depression. Given the economic status of the times, Larry's father, Raymond Gilbert, had to go to work at an early age and never got beyond 8th grade. That was not uncommon among lower class citizens in the U.S. in those days. Larry can not remember being told how far his mother, Dorothy Jane Gengler, progressed in school. Larry was the third born son and his mother had always wanted a daughter. Ergo, she kept him in well-trimmed curls until he was four years old. Some of those curls exist today. There is photographic proof of this, much to Larry's chagrin. She also named him 'LaRue'. He never got an opportunity to find out why. But he did have to fight his way through Jr. High School to prove he wasn't --- a sissy! Ironically, he ended up liking the name. Larry's parents divorced when he was three. His mother married Edward "Babe" Mariola and moved to Oakland, CA. Babe worked at the Ford plant in Richmond. Money was scarce. When Larry's mother passed away in March 1942, Larry was almost 12. The court decided he should go live with his father in Richmond. After graduating Richmond High School with honors in 1949 (he lost a year because his leg broke three times while attending RUHS), he married his high school sweetheart, Mary Evelyn Lindsey, on Sept. 1, 1950. Following her parents, they moved to Fayetteville, AR. Larry graduated from the University of Arkansas, with the unselfish help of Mary, he earned a Bachelor of Science degree in Education (cum laude). While there, they became the proud parents of Kathy Lynn (Andre) Ellis, who now lives in San Saba, TX with her husband Joe. Remembering the difficulty he experienced during his own early teens, Larry chose to teach 7th and 8th grades. He had a gift of making subject matter relevant while supporting his student's emotional and social development. He and Intermediate School seemed to be meant for each other. He loved the 30 years of helping his students grow toward adulthood. Larry and Mary divorced in 1957. In 1961, Larry met Sandra Jean Norton who had moved from Rochester, MN to continue her teaching career at El Dorado Intermediate School in Concord, CA. Coincidentally, that happened to be where Larry was teaching that particular year. Besides being a statuesque Scandinavian beauty, Sandi drove a 1961 powder blue Corvette. Love blossomed and they were married on August 18, 1962 in her hometown of Spencer, IA. At their marriage, Larry was introduced to West Lake Okoboji, a part of the Iowa Great Lakes chain of lakes in Northwest Iowa. He fell in love with the lakes area almost as much as he had fallen in love with Sandi. Over their 52 years of marriage they continued to return to the lakes during the summers. In 2004 they decided to sell their beloved Queen Anne Victorian home in Martinez, CA and move to their cottage on West Lake. Larry is survived by his daughter, Kathy Andre Ellis and her husband Joe of San Saba, TX; two brothers, Ralph Andre and his wife Ruth of Buellton, CA and Robert Andre and his wife Ruth of Las Vegas, NV; and several nieces and nephews. He was preceded in death by his parents and his beloved wife, Sandi. Private family services for Larry will be at a later date. Memorials may be made in Larry's name to the Sandra J. Norton Andre Scholarship or the Sandra J. Norton Andre Library Fund and sent to Institutional Advancement, Cottey College, 1000 Austin, Nevada MO 64772. Bless everyone who sends a tax deductible gift to Cottey College. Remember to say "I Love You" at every opportunity. It never gets old!

Larry was born in Richmond, CA during the Great Depression. Given the economic status of the times, Larry's father, Raymond Gilbert, had to go to work at an early age and never got beyond 8th grade. That was not uncommon among lower class citizens... View Obituary & Service Information

The family of LaRue "Larry" Andre created this Life Tributes page to make it easy to share your memories.

Larry was born in Richmond, CA during the Great Depression. Given...

Send flowers to the Andre family.