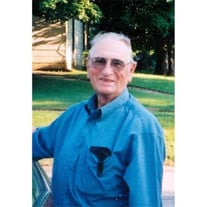 Leo R. Hanson, age 87 and 5 months, of Spirit Lake, passed away peacefully surrounded by his family on Wednesday, February 13, 2013, at Sanford Hospital in Sioux Falls, South Dakota. He was born on September 12, 1925, in Radcliffe, Iowa, to Hans and Elsie Baldwin Hanson. Leo graduated from Radcliffe High School in Radcliffe, Iowa. He served his country in the United States Navy, during WW II. When he returned from the war, he started farming in 1954, and sold seed for 45 years in N.W. Iowa. During this time he was also worked as a Federal Crop Adjustor and for the Dickinson County Assessor's Office. Leo was a member of the V.F.W., the American Legion, the Superior Telephone Board, the Superior Coop Elevator Board, the Superior Cemetery Board, the Dickinson County Museum Board, Senior Center Board, Dickinson County ASCS Board and the Union State Line Lutheran Church Board. He enjoyed spending his spare time fishing and playing cards. Leo's true love was his family and going to his grandchildren's school activities. Leo is survived by his wife, Romaine Hanson of Spirit Lake; two daughters, Rox Ann Pie, and her husband, Timothy of Sturtevant, Wisconsin, and Karla Hagedorn, and her husband, Keith of Spirit Lake; two sons, Meredith Hanson, and his wife, Kay of Spirit Lake, and Leon Hanson, and his wife, Teresa of Spirit Lake; ten grandchildren, Timmy and Tommy Pie, Christopher, Justin, Eric, and Corey Hanson, and Brandon, Chad, Holly and Austin Hagedorn; five great-grandchildren; and a brother, Richard Hanson, and his wife, Vicki of Carmichael, California. He was preceded in death by his parents; a brother, Hubert; and an infant sister, Jane. A funeral service will be held at 1:30P.M. Sunday, February 17, 2013, at the Union State Line Lutheran Church in Petersburg, Minnesota. Visitation will be held Saturday, from 3:00P.M. until 6:00P.M. at the Schuchert Funeral Home. Burial will be at Lakeview Gardens Cemetery. In lieu of flowers, memorials may be given in Leo's name. The Schuchert Funeral Home is in charge of the arrangements.

Leo R. Hanson, age 87 and 5 months, of Spirit Lake, passed away peacefully surrounded by his family on Wednesday, February 13, 2013, at Sanford Hospital in Sioux Falls, South Dakota. He was born on September 12, 1925, in Radcliffe, Iowa, to... View Obituary & Service Information

The family of Leo Hanson created this Life Tributes page to make it easy to share your memories.

Send flowers to the Hanson family.