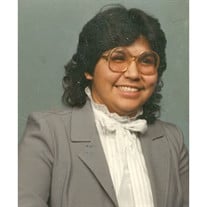 Lina J. Chavez, age 47, of Estherville, passed away on Sunday, January 20, 2013, at Hilltop Care Center in Spirit Lake. She was born on August 9, 1965, in San Saba, Texas, to Arthur and Marge Gonzales. Lina owned and operated L.J.C. Telemarketing for many years. She enjoyed spending her spare time crocheting, playing word games, reading and working on arts and crafts. Lina is survived by her three daughters, Precious Loma of Estherville, Elisa Torres of Swansea, Illinois, and Vilma Velasquez of Humboldt; a son, Felix Velasquez of Estherville; her parents, Arthur and Marge Gonzales of Norman, Oklahoma; sister, Grace Bryant of Dunnell, Minnesota; two brothers, Arthur Gonzales, and his wife, Dena of Oklahoma, and Jeff Gonzales of Texas; and thirteen grandchildren. A memorial service will be held at 1:00P.M. Wednesday, January 23rd, 2013, at the Schuchert Funeral Home in Spirit Lake. The Schuchert Funeral Home is in charge of the arrangements.

The family of Lina J. Chavez created this Life Tributes page to make it easy to share your memories.

Send flowers to the Chavez family.