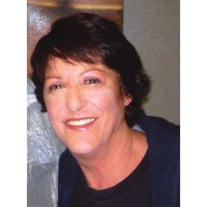 Linda Sue Pinkham, age 58, of Spirit Lake, formerly of Spencer, passed away Friday, July 26, 2013, at her home in Spirit Lake. She was born on October 4, 1954, in Norwalk, Connecticut, to Rexford and Peggy (Brady) Pinkham. Linda enjoyed spending her spare time riding motorcycles, camping, fishing, listening to rock n' roll, and playing the drums and guitar. She loved watching the Minnesota Vikings, as she was a huge fan! Linda never met a stranger. Linda is survived by her three children, Brian Drahota of New Milford, Connecticut, Dawn Kuemper, and her husband, Greg of Estherville, and Kim Drahota of Estherville; five grandchildren, Anessa, Taylor and Rhiannon Alvarez of Estherville, and Jenna and Lia of New Milford, Connecticut; three step-grandchildren, Adam, Brian and Kevin Kuemper; two sisters, Deborah Olearos, and her husband, Alex and Scottie Golden, and her husband, Darrel; nieces and nephews, Peggy Aagard, Chuck Golden, Christopher and Kimberlie Speight and Michael and Christine Speight; and her best friend, Clarence Peil, and his daughter, Tammi Von Ehwegen, and his son, Pete Peil. A memorial service will be held at 11:00A.M. Friday, August 2, 2013, at the Schuchert Funeral Home. In lieu of flowers, memorials may be given in Linda Sue's name. The Schuchert Funeral Home is in charge of the arrangements.

The family of Linda Sue Pinkham created this Life Tributes page to make it easy to share your memories.

Send flowers to the Pinkham family.