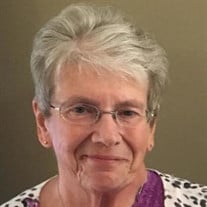 Linda L. Robinson, 70, of Manchester, Iowa passed away peacefully on Sunday, January 8, 2017 at Unity Point St. Luke’s Hospital surrounded by her family. A memorial service will be held at a later date. The Schuchert-Lentz Funeral Home in Spirit Lake, IA is in charge of the arrangements. Online condolences may be sent to the family at www.spiritlakefuneralhome.com Linda was born on October 26, 1946 to Randall and Juanita (Annear) State. She graduated from West Delaware High School in 1965. She then attended Tyler Beauty Academy in LeMars, IA. Upon graduation she worked in salons in Sioux City, Oelwein, and Manchester. In 1971 she opened her own salon. Linda was united in marriage to Keith Robinson at First Lutheran Church in Manchester on September 8, 1973. In 1986 she decided her passion was centered around her sons, so she sold her salon and started volunteering her time and effort to the many actives they were involved in which lead to her second career working for the West Delaware School District. She retired from there as a building secretary after 25 years in 2013. For over 25 years she volunteered with her husband devoting countless hours to the Boys Scouts of America. Two of her proudest moments was when she pinned the Eagle Scout Badge on both her sons. Linda also enjoyed reading, gardening, planting many flowers every year on her patio for family and friends to enjoy. She enjoyed playing cards and day tripping with her friends Ron and Diane Gienapp. She had a talent for cooking and baking. She looked forward to sharing her cooking and baked goods with her dear friend Joan Harris. Anyone who was invited over for a meal never left hungry. Her grandchildren looked forward to visits at grandma’s where they knew they were going to be spoiled! She also enjoyed doing counter cross stich and knitting, which she has passed onto her granddaughter. In her later years, Keith and Linda made their second home at the family acreage in Dundee where you could find Linda keeping the camp fire burning for cooking and baking using her cast iron dutch ovens. Another one of her favorite hobbies at the acreage was mowing the grass, working in her garden, watching nature and giving each deer that visited the feed bunk a name. Linda touched many lives and will be deeply missed by all who had the privilege of knowing her. Left to carry on her legacy is her husband Keith Robinson of Manchester, IA; son Kevin (Becky) Robinson of Spencer, IA and their children Morgan and Brody; son Korey (Kerri) Robinson of Spirit Lake, IA and their children Spencer, Tyson and Jasper; brother-in-law’s Cal (Erma) Robinson of Manchester, IA; Kyle (Christine) Robinson of Cedar Rapids, IA; sister-in-law’s Dona (Merle) Robinson-Pierce of Manchester, IA; Penny State of Waverly, IA; brother-in-law Bill Patton of Storm Lake, IA and many nieces and nephews. She was preceded in death by her parents, in-laws Walter and Alice Robinson, brother R. Dean State, sister Janice Patton and brother-in-law Gary Robinson. A scholarship fund is being established in Linda’s name

Linda L. Robinson, 70, of Manchester, Iowa passed away peacefully on Sunday, January 8, 2017 at Unity Point St. Luke&#8217;s Hospital surrounded by her family. A memorial service will be held at a later date. The Schuchert-Lentz Funeral Home... View Obituary & Service Information

The family of Linda L. Robinson created this Life Tributes page to make it easy to share your memories.

Send flowers to the Robinson family.