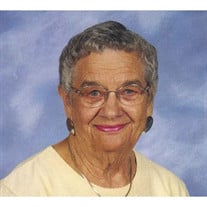 Lois E. Lynn, age 92, of Spirit Lake, passed away Monday, October 28, 2013, at Lakes Regional Healthcare in Spirit Lake. She was born on August 28, 1921, in Havelock, Iowa, to John and Margaret (Derr) Ralle. Lois graduated from Spencer High School in 1939, and went to work for Bjornstad Hardware in Spencer. She was united in marriage to Charles Eugene Lynn on September 25, 1942, in Spencer, Iowa. Charles passed away on December 3, 2003. Lois worked for many years as a bookkeeper for Peoples Natural Gas. She was a member of St. Mary's Catholic Church, and was active in Catholic Daughters of America, the Parish Council, the Cemetery Board, funeral committees and was always eager to lend a hand for anything involving the church. Lois truly loved her family, her friends, her faith, and Spirit Lake. Lois is survived by a daughter, Linda Cook of Spirit Lake, and her children, Lara Walker, and husband, Wade, Jason Cook, both of San Diego, California, Jeffrey Cook, and wife, Amanda, of Chandler, Arizona, and Lisa Riley, and husband, Shad of Gilbert, Arizona; a son, Charles E. Lynn Jr., and wife, Cheryl of St. Louis, Missouri, and their children, John Lynn, and wife, Jennifer, Mark Lynn and wife, Dawn, Paul Lynn and Amy Otis, and husband, Tim, all of St. Louis, Missouri; children of Tom Lynn, Teena Andrews, and husband, Harry of Oskaloosa, Angela Kilburn and Stacey Shaffer, and husband, Ryan of Atlanta, Georgia; three sisters, Arvis Gross of Grand Junction, Iowa, Janice Smith, and husband, Vern of Apache Junction, Arizona, and Arlene Joblonski, and husband, Charlie of Mesa, Arizona; eleven grandchildren; and seventeen great-grandchildren. She was preceded in death by her parents; her husband, Charles "Chuck" Lynn; a son, Tom; a grandson, Brian Cook; and one sister, Lavone Toelle. A funeral Mass will be held at 10:30A.M. Friday, November 1, 2013, at St. Mary's Catholic Church in Spirit Lake. Visitation will be held one hour prior to the Mass at the church. Burial will be at St. Margaret's Cemetery. There will a luncheon immediately following the funeral Mass. The Schuchert Funeral Home is in charge of the arrangements.

The family of Lois Lynn created this Life Tributes page to make it easy to share your memories.

Send flowers to the Lynn family.