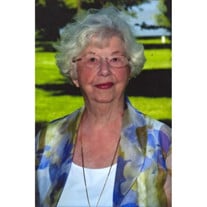 Lois Maxine (Madsen) Powers, age 96, of Okoboji, Iowa passed away March 5, 2016 of natural causes at home surrounded by her family. Lois Maxine Madsen was born on May 18th, 1919 to Tora (Rouse) Madsen and Harry James Madsen on their farm in northwest Iowa. She had one older sister Neva Madsen Swan. Lois was very busy as a child doing all the daily chores on the farm, riding horses, loving her pets, harvesting all of the garden vegetables and fruits, practicing her piano, working on 4-H projects and studying. She was very involved in 4-H, earning many awards, even going to Washington D.C. as the Iowa State representative for 4-H. She then went on to Iowa State University, joining the Delta Zeta sorority, graduating in 1941 with a degree in Journalism. Graduation from ISU was one of her proudest moments. She immediately headed to Chicago, IL. and in one week started writing for the Chicago Daily News. She had a weekly column, under a pen name in the home and cooking section. She was a column writer from 1941-1943. She continued to be a columnist in the Sioux City Diocesan paper for over 16 years after moving back to Iowa. Soon after moving to Chicago, Lois met John "Jack" Lewis Powers on a blind date under the clock at Marshall Fields. They married on June 8, 1942 in Chicago, IL. Jack was then sent off to use his medical skills in WW II, so Lois and baby John moved back to the family farm until Jack safely returned. She taught at the Lake Center township school during this time. Following WWII Lois, Jack, and John moved to Fort Wayne, IN, where Jack worked on his surgical training. The family then moved to Estherville, IA, where they raised John, Madeline, Jim, Ann, Steve and Susie until 1980. Their home was always filled with the smells of food cooking, children practicing the piano, flute, and trumpet, kids studying and plenty of laughter. Lois spent a great deal of time in her tiny kitchen preparing meals for eight, where the family always sat around the table, prayed and then shared our days' activities. Lois was very busy in Estherville. She was a Cub Scout and Girl Scout leader for over ten years. She was an active member in her investment club and bridge club. She supported many events at St. Patrick's Catholic Church. She organized and managed a classical concert series for years. She and Jack were instrumental in getting the Estherville Winter Sports Festival off the ground. She never missed her children's many activities which included: band and choir concerts, musicals, ski races, wrestling matches, track meets, and a variety of other events to name just a few. In the summers she would load up the "Woody" station wagon and move all of the family as well as the family dog over to the cottage at Lake Okoboji. At the lake, she continued to be involved in the local community and supporting all of the family activities. She was a founding member of the Lakes Art Center. She was an active member of the Okoboji Yacht Club, often running the registration desk for the many regattas. She and Jack and friends set and ran the Wednesday 5pm series of races for years. She watched 1000's of sailboat races, either driving the boat or watching from the bench on the point. She always had kind words to cheer us up after a rough day on the water, warm hot chocolate after cold, windy races and a full lunch waiting. Lois was a naturalist, a historian, a gardener, a bird watcher, an avid Iowa State fan, a quilter and painter, a well-informed political observer and an amateur weather reporter. All who visited her loved to see and discuss her bird activity, her arrowhead collection and all of her flowers in her garden. She may have grown up on a farm, but she never gave up her farm duties. She was an astute grain marketer and an aware farm manager into her final year. She took great pride in all of these activities. Nonnie was very proud of her twelve grandchildren and eleven great grandchildren. She often read to them or told them tales of bunnies and other things in nature. She made every one of them their own "Nonnie blanket." These were hand sewn personal quilts that all the children still find comfort in. Lois was preceded in death by her parents, Tora and Harry Madsen, her sister, Neva, her husband, Dr.John L. Powers II, her son, John Lewis Powers III, her daughter, Ann Powers Oakley, her granddaughter, Nicole Anne Powers and her niece, Jean Swan Wyatt. She is survived by her children, Madeline Powers Beery (Bill), James Harry Powers (Cyndy), Dr. Steven Powers (Marian) and Susan Powers Brantley (Wade). She also has 12 grandchildren and 11 great grandchildren. In summary, Lois was an amazing woman and will be greatly missed by all. She certainly lived every day of her life to the fullest. She truly filled the "dash" 1919-2016 with love and light for all. Lois wanted to be sure and thank all of her family, friends, neighbors, and care takers for all of their love and support over the years. At Lois' request donations can be made in her name to: St. Mary's Catholic Church, the Dickinson County Nature Center (dickinsoncountyconversationboard.com) or the Lakes Area Dog Park (lakesareadogpark.com) A Funeral Mass will be held on Friday, March 11, 2016 at 10:30 A.M., at St. Mary's Catholic Church in Spirit Lake, Iowa. Visitation and viewing time will be that morning at 9:30 A.M. All are invited to join the family afterwards for lunch at the church. A Celebration of her Life will be Friday, May 13th from 4-7pm at her home. We encourage all to come and share stories in our celebration at that time.

Lois Maxine (Madsen) Powers, age 96, of Okoboji, Iowa passed away March 5, 2016 of natural causes at home surrounded by her family. Lois Maxine Madsen was born on May 18th, 1919 to Tora (Rouse) Madsen and Harry James Madsen on their farm in... View Obituary & Service Information

The family of Lois Powers created this Life Tributes page to make it easy to share your memories.

Send flowers to the Powers family.