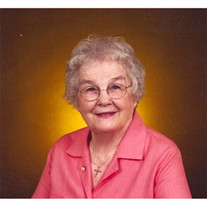 Lorene Mildred (George) Gustafson was born on a farm near Laurens, Iowa on January 14, 1923. Her parents were Lyman and Arlene (Burroughs) George. They soon moved to a farm near Rolfe, Iowa, where Lorene grew up with one older brother and four younger sisters. Lorene graduated from Rolfe High School. On March 9, 1942, she married Harold Gustafson from Albert City, Iowa. Harold was in the Army and they lived in Pharr, Texas, for three years where he was stationed. They then moved to a farm northeast of Albert City where Harold grew up. Lorene and Harold had eight children who all grew up on this farm. They moved to Okoboji, Iowa, in 1980. Prior to moving to Okoboji, she spent several years working at Pleasant View Nursing Home in Albert City. Lorene worked with Dickinson County as a home health aide after moving to Okoboji. During retirement, Lorene was an active member of First Presbyterian Church in Spirit Lake. She also taught Bible study classes at Welcov Assisted Living for several years. Lorene was dedicated to her Christianity and enjoyed the comfort it gave her. Lorene was an extremely talented seamstress. She made numerous dresses for her daughters, granddaughters and great granddaughters, as well as a quilt for each of her grandchildren. And no one . . . could ever top her homemade pies . . . at the church auction, the family reunion, or at dinner with her children. Lorene died at Hilltop Care Center on Monday, March 9, 2015 (Harold and Lorene's wedding anniversary). She is survived by seven children - Jean Mark (Doug) of Ann Arbor, Michigan, Loren Gustafson (Linda) of Spirit Lake, Iowa, Dennis Gustafson (Jeanne) of Lone Tree, Colorado, Rosemary Buchholz of Madison, Wisconsin, Ruth Ann Wolf (Paul) of Middleton, Wisconsin, Lance Gustafson (Wanda) of Overland Park, Kansas, and Bruce Gustafson (Peggy) of Okoboji, Iowa. Lorene also leaves 14 grandchildren and 17 great grandchildren to mourn her passing. She was preceded in death by her husband Harold, son Thomas, and son-in-laws Michael Levan and Mike Buchholz and granddaughters Erin and Michelle Buchholz. Visitation will be held Friday, from 4 to 6 PM at the Schuchert-Lentz Funeral Home. Funeral services will be at 10:30 A.M. at the First Presbyterian Church, Spirit Lake, Iowa on Saturday, March 14, 2015. Burial will be at Lakeview Cemetery in Spirit Lake.

Lorene Mildred (George) Gustafson was born on a farm near Laurens, Iowa on January 14, 1923. Her parents were Lyman and Arlene (Burroughs) George. They soon moved to a farm near Rolfe, Iowa, where Lorene grew up with one older brother and four... View Obituary & Service Information

The family of Lorene Gustafson created this Life Tributes page to make it easy to share your memories.

Lorene Mildred (George) Gustafson was born on a farm near Laurens,...

Send flowers to the Gustafson family.