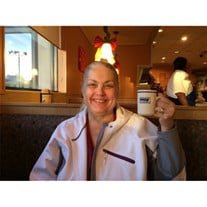 Loretta C. Schweitzer, age 55, of Spencer, passed away Wednesday, November 18, 2015, at the Spencer Hospital. She was born on August 14, 1960, in Chattanooga, TN, to Robert and Francis (Scarborough) Keith. Loretta graduated from Burroughs High School in Ridgecrest, CA, in 1978. She worked as a manager at Sprouse-Reitz in California from 1978-1985. She also worked in the billing department at the hospital in Ridgecrest and as the business office supervisor at the Spirit Lake Hospital. Most recently, she worked as a HR generalist at Northern Iowa Die Casting in Lake Park. In recent years, Loretta attended ILCC and earned her A.A. Degree in Accounting. On December 18, 1993, Loretta was united in marriage to Michael Schweitzer at the United Methodist Church in Ridgecrest, CA. Loretta enjoyed movies and music, reading books, anything Disney, traveling, especially to Key West, snorkeling, and bicycling. Loretta is survived by her husband, Michael, of Spencer; daughter, Sarah Schweitzer of Spencer; sister, Annetta (Scott) Petrovich, of Ridgecrest, CA; brother, Robert Lee Keith II of South Carolina; and father, Robert Lee Keith I, of Ridgecrest, CA. She was preceded in death by her mother, Francis; grandparents; and mother-in-law, Deloris Schweitzer. A memorial service will be held at 1:30 P.M., Monday, November 23, 2015, at Hope Church in Spencer. Visitation will begin at 12:00 P.M. until service time at the church. Following the service, cookies and refreshments will be served at the church.

Loretta C. Schweitzer, age 55, of Spencer, passed away Wednesday, November 18, 2015, at the Spencer Hospital. She was born on August 14, 1960, in Chattanooga, TN, to Robert and Francis (Scarborough) Keith. Loretta graduated from Burroughs... View Obituary & Service Information

The family of Loretta Schweitzer created this Life Tributes page to make it easy to share your memories.

Send flowers to the Schweitzer family.