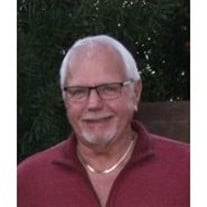 Loyal Robert "Butch" Jensen, the son of Lawrence and Marguerite Jensen, was born on July 28th, 1945 in Blue Earth, MN. He was raised on the family farm, was confirmed at Salem Lutheran Church in Pilot Grove, MN and graduated from East Chain High School in 1963. Following high school Butch enlisted in the Army. While in the service he married his high school sweetheart Joyce Madsen. He was honorably discharged in 1966. In 1971, Butch and Joyce purchased the A&W in Sibley, IA and began a 19-year career in the restaurant business, owning and operating the A&W, a steakhouse, and building and operating the Dairy Queen in Milford, IA. During this time Butch also entered the world of real estate. Initially involved in restaurant and small business sales, he transitioned to residential sales and was a broker associate for Dowden-Hinn Realtors. Butch and Joyce called Spirit Lake, IA home since 1990. They purchased a winter home in Mesa, Arizona two years ago. Butch passed away unexpectedly at Banner Baywood Medical Center in Mesa, AZ on January 29, 2016 at the age of 70. Butch enjoyed 51 years of marriage with Joyce. He purchased his first Harley Davidson at the age of 11 and was an avid Harley rider his entire life. He enjoyed rock n roll, all sports, and had a love/hate relationship with the Minnesota Vikings. He was a lifetime member of the VFW in Sibley, IA. Always the consummate salesman, Butch enjoyed the thrill of being on either side of a good deal. He was passionate about all things with four wheels, he loved fishing, he enjoyed cooking (and of course eating) good food, and was a collector of firearms. Butch could always be counted on for good conversation and had many friends, but his best buddy may have been his chocolate lab, Buster. Butch is survived by his wife, Joyce; his daughter, Kirstin and son-in-law, Steve LeClaire of Tempe, AZ; his son, Michael and daughter-in-law, Alicia of Soldotna, AK; three grandchildren, Chloe and Christian LeClaire and Gunnar Jensen. Butch is also survived by two brothers and their spouses, David and Charlotte Jensen and Chuck and Donna Jensen; Joyce's siblings and their spouses, Lowell and Janet Madsen, Lois and Clyde Allen, Helen and Ronnie Stenzel, Eunice and LaReau Carlson, and Meli and Larry Doyle; as well as many nieces and nephews. Butch was preceded in death by his parents; and infant son, Stephen. Butch lived life fully. He loved God and his family. The room is quieter and there is a hole in our hearts now that Butch has gone to be with the Father. He blessed our lives and will never be forgotten. A memorial service will be held at 11:00 A.M. Saturday, February 27, 2016, at First Lutheran Church in West Okoboji. Visitation will be held Friday, February 26, 2016, from 5:00 P.M. until 7:00 P.M. at the Schuchert-Lentz Funeral Home. The Schuchert-Lentz Funeral Home is in charge of the arrangements.

Loyal Robert "Butch" Jensen, the son of Lawrence and Marguerite Jensen, was born on July 28th, 1945 in Blue Earth, MN. He was raised on the family farm, was confirmed at Salem Lutheran Church in Pilot Grove, MN and graduated from East Chain... View Obituary & Service Information

The family of Loyal "Butch" Jensen created this Life Tributes page to make it easy to share your memories.

Loyal Robert &quot;Butch&quot; Jensen, the son of Lawrence and Marguerite...

Send flowers to the Jensen family.