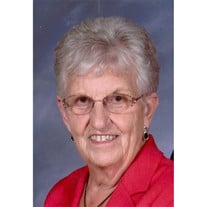 Marilyn Elizabeth Bierstedt, age 79, of Milford, formerly of Fonda, passed away Thursday, December 6, 2012, at the Milford Nursing Center. She was born on June 23, 1933, in Algona, Iowa, to Arnie and Mary (Miller) Elbert. Marilyn graduated from St. Cecelia's School in 1950. She was united in marriage to Don Bierstedt on November 28, 1950, in Algona, at St. Cecelia's Catholic Church. They were blessed with five children, Donna, Raymond, Debra, Denise and Rick. Marilyn enjoyed spending her spare time knitting, crocheting and tempting everyone with her yummy homemade pies. "She even left some in the freezer we are continuing to eat!" She loved her family and all the enjoyment they brought to her life. Marilyn's worst enemy ended up being her very best friend, her computer. She loved the ability to keep in touch with her family, especially her many loyal grandchildren. Marilyn is survived by her husband, Don Bierstedt; four children, Donna (Ron) Hansen, Debra (Roger) Holtorf, Denise (Paul) Hirneise, and Rick Bierstedt; ten grandchildren; ten great-grandchildren; three brothers, Bill (Ruth) Elbert, John (Shirley) Elbert and Joe (Cheri) Elbert; and two sisters, Agnes (Ron) Illg and Mary (Larry) Arndt. She was preceded in death by her parents; son, Dr. Raymond Bierstedt; granddaughter, Anne Holtorf Birt; daughter-in-law, Jane Bierstedt; brother, Arnie Elbert Jr.; and sister, Phyllis Fisher. A funeral Mass will be held at 10:30A.M. Monday, December 10, 2012, at St. Joseph's Catholic Church in Milford. Visitation will be held Sunday, from 4:00P.M. until 6:00P.M., with a Vigil for the Deceased at 6:00P.M. at the Schuchert Funeral Home. Burial will be at 2:30P.M. Monday, at Mt. Zion Cemetery in Fonda. In lieu of flowers, memorials may be given in Marilyn's name. The Schuchert Funeral Home is in charge of the arrangements.

The family of Marilyn Bierstedt created this Life Tributes page to make it easy to share your memories.

Send flowers to the Bierstedt family.