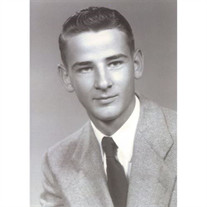 Marion P. Durbala, age 79, of Cedar Falls, Iowa, passed away May 18, 2013, at the Community Memorial Health Center in Hartley, Iowa. He was born on March 8, 1934, in Albia, Iowa, to Frank and Margaret (Bins) Durbala. Marion grew up on a small farm outside Lovilia, Iowa with his two brothers and three sisters. After graduating from Albia High School, he spent two years serving his country in the United States Army, most of his time spent at Ft. Leonard Wood in Missouri. Marion returned to Iowa, where he graduated from Drake University with a degree in accounting. He worked for seventeen years with JS Latta and Co. in Cedar Falls, as a controller and CFO. Marion moved on to become the Financial Director for the Area Education Agency #7 in Waterloo, Iowa, before retiring in the late 1990's. During his active years, Marion enjoyed playing golf as often as possible, playing through the summer of 2012. He was also a highly competitive bridge player. He was a passionate reader of history books, particularly about World War I, as his father had served in the trenches in France with the 82nd Division. He always wanted to learn about everything his father had experienced and one of his prized possessions was the 1918 unit photograph that included Corporal Frank Durbala (his father). Marion is survived by his children, Douglas Durbala, and his wife, Susan of Spirit Lake, David Durbala of Mason City, and Dorian Ayala, and her husband, Omar of San Antonio, Texas; five grandchildren; two sisters, Jean Hollinrake, and her husband, Joe of Lovilia, and Patricia Baldus of Ames; brother, Robert Durbala, and his wife, Suzanne of Newton; sister-in-law, Margaret Durbala of Newton; and a brother-in-law, Michael Fisher of St. Joseph, Missouri. He was preceded in death by his parents; brother, Thomas Durbala; sister, Margaret Fisher; and brother-in-law, Norm Baldus. Visitation for 79 year old Marion P. Durbala of Cedar Falls, will be held Thursday, from 5:00P.M. until 7:00P.M. at Richardson Funeral Service in Cedar Falls. A graveside service will be held at 1:00P.M. Friday, at St. Peter's Cemetery in Lovilia, Iowa. In lieu of flowers, memorials may be given in Marion's name. The Schuchert Funeral Home is in charge of the arrangements.

Marion P. Durbala, age 79, of Cedar Falls, Iowa, passed away May 18, 2013, at the Community Memorial Health Center in Hartley, Iowa. He was born on March 8, 1934, in Albia, Iowa, to Frank and Margaret (Bins) Durbala. Marion grew up on a small... View Obituary & Service Information

The family of Marion P. Durbala created this Life Tributes page to make it easy to share your memories.

Send flowers to the Durbala family.