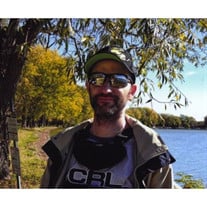 Markis Joel Revland, age 38, of Arnolds Park, passed away Wednesday, November 5, 2014, at his home in Arnolds Park. He was born on June 9, 1976, in Spirit Lake, to Mark Revland and Rhonda Revland Nelson. Markis attended Arnolds Park Schools, before earning his G.E.D. from Iowa Lakes Community College. He was very passionate about singing, playing his guitar every chance he had and was an accomplished artist as well. Markis enjoyed watching the Iowa Hawkeyes, shooting pool and all sports. Markis is survived by his son, Dawson Miller; his mother, Rhonda Nelson, and her husband, David of Arnolds Park; his father, Mark Revland of Arnolds Park; sister, Katie Christoffel, and her husband, Curtis of Granville; brother, Michael Revland, and his wife, Eileen of Morehead, Minnesota; grandparents, Dick and Sally Nelson of Arnolds Park, and Joel Anderson of Laurens; two step-sisters, Amy Hennies, and her husband, Jason of Dakota Dunes, and Kari Jacobsen, and her husband, Heath of Milford; several aunts, uncles, cousins, nieces and nephews; and a special friend, Stephaney Barber of Milford. He was preceded in death by his grandmothers, Frances Revland and Sharyn Anderson. A memorial service will be held at 10:30A.M. Saturday, November 8, 2014, at Harbor of Joy Lutheran Church in Milford. A memorial visitation will be held Friday, from 5:00P.M. until 7:00P.M. at the Schuchert-Lentz Funeral Home in Spirit Lake. The Schuchert-Lentz Funeral Home is in charge of the arrangements. #tributes, #photos, #videos{ display: none; }

The family of Markis Revland created this Life Tributes page to make it easy to share your memories.

Send flowers to the Revland family.