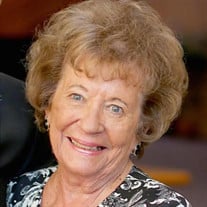 Marney Lucille (Hinn) Norman, age 89, passed away at Gables Care Center in Wayzata, MN on Tuesday, July 20, 2021. During her final days, Marney was surrounded by many of her immediate family members who were able to give her their care, love and gratitude as she moved into the hands of our Heavenly Father. A celebration of Marney’s life will be held at the Spirit Lake United Methodist Church in Spirit Lake, IA on Saturday, August 21, 2021. Visitation will begin at 10:00 am and her service will start at 10:30 am. All are invited to Wesley Hall for a reception and lunch immediately following the church service. Marney’s burial service will take place following the luncheon at Memorial Gardens Cemetery where she will be laid to rest next to her beloved husband James “Jim” Sylvan Norman. Marney was born on August 9, 1931 in Laurens, IA to Robert Morris “Morey” and Irma Lucille Hinn. She was the oldest of Morey’s and Irma’s two children. She attended and graduated from Laurens High School and then attended Drake University in Des Moines, IA where she was a member of the Kappa Alpha Theta sorority. In January 1951, Marney travelled via train to Las Vegas, NV where she was met by the love of her life and fiancé, Jim Norman. Jim was stationed at the Nellis Airforce Base near Las Vegas. They were married on January 27, 1951 at The Little Church of the West and resided in Las Vegas, beginning 66 years of a loving, caring and happy marriage. In November 1953, Jim, Marney and their toddler son moved to Primghar, IA. where they opened a Ford Dealership and proudly served as active business owners in the Primghar community for over 50 years. Marney and Jim were true partners in their business and in their lives. They were both members of The United Methodist Church of Primghar, and Marney was active in many church-related women’s groups. She was also a member of the Eastern Star chapter in Primghar. Their family grew to three children and they were surrounded by many wonderful friends while living in Primghar. In February 2014, Jim and Marney moved to Wayzata, MN to be closer to their children, grandchildren and great-grandchildren. Marney was preceded in death by her husband, her father, her mother, and her younger brother John M Hinn of Spirit Lake, IA. She is survived and blessed by a large legacy of family including her three children, Jim (wife Patty), Jane (husband Tim) and John (wife Beth), plus 10 grandchildren and 12 great-grandchildren (with another expected in November). Marney’s family is planning to purchase donation paver bricks in her honor at the Arnolds Park State Pier. Any memorial donations received will be used for this purpose. Both Marney and Jim loved spending time at the Iowa Great Lakes and it was where they first met during the summer of 1950.

Marney Lucille (Hinn) Norman, age 89, passed away at Gables Care Center in Wayzata, MN on Tuesday, July 20, 2021. During her final days, Marney was surrounded by many of her immediate family members who were able to give her their care, love... View Obituary & Service Information

The family of Marney Lucille Norman (Hinn) created this Life Tributes page to make it easy to share your memories.