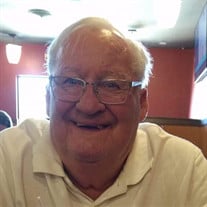 Marv “Marvin” Johnson, 83, of Spirit Lake passed away on Sunday, August 4, 2019 at his home. A visitation will be held on Thursday, August 8, 2019 from 10 a.m. – 12 p.m. at the Schuchert-Lentz Funeral Home in Spirit Lake. A private family burial will take place in the Lake View Cemetery in Spirit Lake. Marv was born on December 12, 1935 in Minneapolis, MN to Eric and Della (Smith) Johnson. He graduated from South High School in Minneapolis, MN. Marv served his country in the Army Reserves. He was united in marriage to Carol Kranz on June 23, 1962. She preceded him in death on November 17, 2018. Marv worked in the printing business in Minnesota and for Heartland Press in Spencer, IA. In his free time and in retirement, Marv loved to spend his days golfing. In his early years, he was a go cart racer where he proudly wore #10. He was also on the water patrol team and the under-water rescue team in Minnesota. Marv treasured time spent with friends and family, especially time with his grandchildren. Left to cherish his memory is his children Rick (Judy) Johnson of Lindstrom, MN; Greg (Shelley) Johnson of Alta Loma, CA; Randy (Denise) Johnson of Windom, MN; Jodi (Jon) Miller of Spirit Lake and Kari (James) Smart of Mobile, AL; eleven grandchildren, nine great grandchildren. Sister Anne Johnson of Minneapolis, MN. Also left to cherish his memory are is his close family friend Becky Tolan. He was preceded in death by his parents, stepmom Ethel, wife Carol and brother Donald Johnson.

The family of Marv "Marvin" Johnson created this Life Tributes page to make it easy to share your memories.

Marv “Marvin” Johnson, 83, of Spirit Lake passed away on Sunday,...