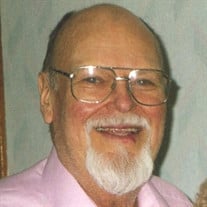 Marvin "Larry" Huffman, age 80, of Spirit Lake, passed away at his home on August 11, 2016. Memorial Services will be 11:00 AM Saturday August 20, 2016 at the Schuchert-Lentz Funeral Home in Spirit Lake. Visitation will be 10:00 AM until service time on Saturday. Marvin Larry Huffman, the son of Marvin A. and Marie (Jerman) Huffman, was born on February 24, 1936 in Anthon, Iowa. He graduated from Anthon High School in 1954. In 1954, Larry was united in marriage with Karen Marie Etler in Pokotello, Idaho. Larry had worked as a heavy equipment operator for the City of Sioux City, retiring in 1998. After retiring in 1998, Larry and Karen moved to the Okoboji area. He was a member of the Assembly of God Church in Spencer. Larry enjoyed taking his family camping with friends every summer, fishing, boating, reading and socializing. Left to cherish Larry’s memory is his wife of 62 years, Karen; three sons, Darryn Huffman of Richardson, TX, Mark (Susie) Huffman of Kerrville, TX and Brett Huffman of Sioux City; a daughter, Kim Schniebs of Spirit Lake; grandchildren, Brittany, Amanda, Shelby, Savannah, Sierra, Larissa and Alisha; ten great grandchildren; a sister, Sharon Costa of Reno, NV; and two brother-in-laws, Larry (Jo) Etler of Moville and Jim (Judy) Etler of Parshall, CO. He was preceded in death by his parents and a sister, LaMona.

The family of Marvin "Larry" Huffman created this Life Tributes page to make it easy to share your memories.

Marvin &quot;Larry&quot; Huffman, age 80, of Spirit Lake, passed away at...

Send flowers to the Huffman family.