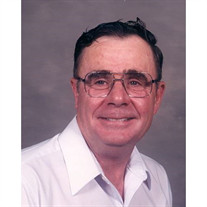 Marvin Lee Mettler, 73, of Arnolds Park, IA, passed away peacefully and went to heaven on Saturday, March 9th. He was born in Huron, SD, on August 28, 1939 to the late Reinhold and Dorothy Mettler. They lived and farmed in that area until 1954 when the family bought a dairy farm in Nevis, MN. He spent his younger years helping on the family farm. In 1957, he enlisted in the Army where he served our country in Korea and Huntsville, AL. He moved to Omaha after his discharge from the military where he worked in a packing house. He relocated to IA to work in construction. Marvin owned Mettler Construction in Arnolds Park where he built and remodeled countless homes and businesses in the Lakes Area. He joined Roc Management in 1987 where he thoroughly enjoyed his employment and thought of his co-workers as an extended family. He is survived by his son Terry (April) Mettler of Taylor, MI; stepson Jim (Leann) Dake of Chanhassen, MN; stepdaughter Sharon (Trent) Eriksen of Hutchinson, MN; two grandsons, Adam & Austin Dake and three granddaughters, Krista DeVoll, Rachel & Anna Eriksen; one great grandson, Brenden Mettler; sisters Deloris (Don) Annis, Jessie (Roy) Bebensee, Dorein (Brian) Johnson and Debra Mettler; nieces, nephews, cousins and many friends. Marvin was preceded in death by his wife of 40 years Karen (Bascom) Mettler, his parents and two brothers, Albert & Gerald Mettler. Please join family and friends at Schuchert Funeral Home at 2317 32nd St. in Spirit Lake for a memorial visitation on Friday, March 15th from 4 to 7 p.m. and at the funeral at First Presbyterian Church, 3501 Hill Ave. in Spirit Lake on Saturday, March 16th at 11:00 a.m. In lieu of flowers, the family is requesting that memorial donations be given in Marvin's name. The Schuchert Funeral Home is in charge of the arrangements.

Marvin Lee Mettler, 73, of Arnolds Park, IA, passed away peacefully and went to heaven on Saturday, March 9th. He was born in Huron, SD, on August 28, 1939 to the late Reinhold and Dorothy Mettler. They lived and farmed in that area until... View Obituary & Service Information

The family of Marvin Mettler created this Life Tributes page to make it easy to share your memories.

Send flowers to the Mettler family.