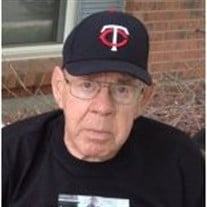 Marvin Sump, age 86, of Sutherland, passed away Sunday, January 18, 2015, at the Orange City Hospital in Orange City, Iowa. He was born on March 3, 1928, in Sutherland, Iowa, to Ernest and Lilly Sump. Marv graduated from Calumet High School in 1946. He was united in marriage to Barbara Sump on December 27, 1950, in Sutherland. Marv entered the U.S. Army on October 3, 1950 and served two years of active duty in the States and in Germany and five years in the Army Reserve. He received an honorable discharge on April 5, 1957. Marv was a dedicated member of American Legion Post 152 in Sutherland for 62 years. Marv worked for the Sutherland Coop Elevator and for Lundell Manufacturing in Cherokee. In 1972 he and Barb moved to Denver, Colorado where they lived until Marv's retirement from the U.S. Postal Service in 1992. They traveled around the country in their motorhome until their Iowa roots brought them back to Sutherland in 1998. In February 2013 they sold their home in Sutherland and moved to Riverview Terrace Assisted Living in Spencer, Iowa. Marv was residing at the Sutherland Care Center at the time of his death. Marv was preceded in death by his wife Barbara on March 16, 2013, his parents, and his brother Richard (Dick). He is survived by three sons, Kevin Sump and his wife, Lesa, of Gilbert, Arizona, Kent Sump of Thornton, Colorado, and Kim Sump of Sutherland; two grandchildren, April Buterbaugh, and her husband, Michael of Brooklyn Center, Minnesota and Brian Sump, and his wife Jill of Golden, Colorado; and two great-grandchildren, Manni and Asher Buterbaugh; and three sisters, Verla Klunder, Denison, Iowa, Sharron Wadsley, Spencer, Iowa, and Sandra Wetherell and her husband Ron of Cleghorn, Iowa. A Celebration of Marv's Life will be held at 11:30A.M. Saturday, January 24, 2015, at the United Methodist Church in Sutherland. The Schuchert-Lentz Funeral Home is in charge of the arrangements.

The family of Marvin Sump created this Life Tributes page to make it easy to share your memories.

Send flowers to the Sump family.