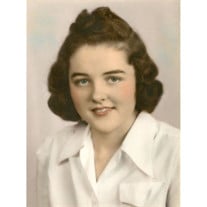 Mary Dolores (DoDo) Conway was born on October 27, 1925, in Fort Dodge, Iowa. Her parents were mother, Georgia Welch Conway and father, Eustace Conway. She was the youngest of 5 children. Her young niece, Patty Kelleher, could not pronounce the name "Dolores" and instead referred to her as "Aunt DoDo." Friends and relatives quickly used it and she became known by many simply as DoDo. Mary Dolores attended and graduated from Corpus Christi High School in Fort Dodge in 1943. Following high school, she attended and graduated from the Fort Dodge Business School in 1944. She was a lifetime member of Corpus Christi until she moved to Spirit Lake, where she belonged to both St. Mary's and St. Joseph parishes. Following Business School, she joined the Webster County Treasurer's staff in 1944, and became Deputy in charge of motor vehicle registration. She enjoyed her duties and was well known in the community for her positive and helpful attitude over the ensuing 43 years. She retired from the Webster County Treasurers Office in 1987, and relocated to the Iowa Great Lakes Area for her remaining years. During these later years, she traveled around northwest Iowa county courthouses gathering data for publication. She loved to take travel vacations with her friends. Travel by car, with sightseeing drives around the lakes area was one of her favorite recreations. She continued to drive her own car up into her early 80s. DoDo loved dogs and in particular, she was very fond of her cocker spaniel, Korky. Dogs sensed her fondness for them and her circle of canine pals continued to expand. Visits by her brittany spaniel pals, Beau and Bella, to see her while she was in the Milford Care Center brightened her days. Mary Dolores Conway is survived by her sister-in-law, Jeanne Conway of Glendale, WI; her nephew, Michael Conway of Glendale, WI; her nieces, Patty (and Gary)Melcher of Phoenix, AZ, Kathleen (and Paul) Johnson of Okoboji, IA, Molly McEnnis of Phoenix, AZ; and her nephews, Denis (and fiancée Dianne Ringhofer)Kelleher of Okoboji, IA, and Travis Kelleher of San Francisco, CA. Mary Dolores had 11 great nieces and nephews and 1 great great niece and 1 great great nephew. Mary Dolores is preceded in death by her parents, Georgia and Eustace; three brothers, Owen, Eustace and Frank; her sister, Mary Elizabeth (Libby) Kelleher; and her niece, Patty Conway. A funeral Mass will be held at 11:00A.M. Monday, February 11, 2013, at St. Joseph's Catholic Church in Milford. Visitation will be held Sunday, from 2:00P.M. until 4:00P.M., with a Vigil for the Deceased at 4:00P.M. at the Schuchert Funeral Home. In lieu of flowers, memorials may be given in Mary's name to the Humane Society of N.W. Iowa.

Mary Dolores (DoDo) Conway was born on October 27, 1925, in Fort Dodge, Iowa. Her parents were mother, Georgia Welch Conway and father, Eustace Conway. She was the youngest of 5 children. Her young niece, Patty Kelleher, could not pronounce... View Obituary & Service Information

The family of Mary Dolores Conway created this Life Tributes page to make it easy to share your memories.

Send flowers to the Conway family.