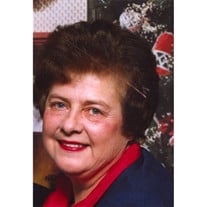 Mary Lou John, age 77, of Spirit Lake, passed away Wednesday, November 20, 2013, at Lakes Regional Healthcare in Spirit Lake. She was born on March 10, 1936, in Buffalo Center, to Harvey and Bertha (Hanssen) Gilbert. Mary Lou worked for 22 years as a Wal-Mart greeter in Spirit Lake. In 2003, she won the Wal-Mart People Greeter of the Year Award, which is given nationally. Mary Lou enjoyed spending time traveling, cooking and baking. She especially enjoyed her time with her grandchildren in the kitchen! Mary Lou is survived by her two daughters, Debbie Papenfuhs, and her husband, Ronnie of Fair Play, Missouri, and Lisa Hennen, and her husband, Brian of Bellbrook, Ohio; two sisters, Delores Griffin, and her husband, Lee of Buffalo Center, and Virginia Oltoff of Buffalo Center; two brothers, Larry Gilbert, and his wife, Joyce of Stewartville, Minnesota, and Dean Gilbert, and his wife, Juanita of Crossville, Tennessee; five grandchildren, Amanda, Jeremy, Tanya, Monica and Cassi; and two great-grandchildren, Lexi and Ally. She was preceded in death by her parents; her husband, Raymond; a sister, Marjorie; and two brothers, Bud and Bobby. A memorial service will be held at 11:00A.M. Saturday, November 23, 2013, at the United Methodist Church in Spirit Lake. Visitation will be held Friday, from 4:00P.M. until 7:00P.M. at the Schuchert Funeral Home.

The family of Mary Lou John created this Life Tributes page to make it easy to share your memories.

Send flowers to the John family.