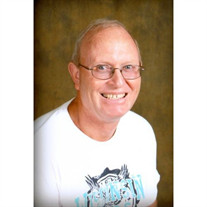 Michael John Roach, age 60, of Superior, Iowa, passed away Monday, June 18, 2012, at Lakes Regional Healthcare in Spirit Lake. He was born on January 29, 1952, in Estherville, Iowa, to Mervin and Pearl Roach. Michael worked for John Morrell in Estherville, the Superior Elevator and for Rosenboom's in Spirit Lake. He was on the Superior City Council and the Superior Zoning Board. Michael lived several years with Jeanette Burke and had a daughter, Michelle. He married Patricia Dietrict on July 8, 1989, and they had four children, Philip, David, Micah and Zachary. Michael married Leisa Hall on May 28, 2011, and Leisa has two daughters, Makalya and Melissa. Michael is also survived by his parents, Mervin and Margaret Roach; brother, Wade Roach, and his wife, Sandra; sisters, Patricia Johnson and Debora Ellman and her husband; and many nieces and nephews. He was preceded in death by his mother, Pearl; and a brother, Gary. A funeral service will be held at 1:00P.M. Friday, June 22, 2012, at the Schuchert Funeral Home. Visitation will be held Thursday, from 4:00P.M. until 6:00P.M. at the Schuchert Funeral Home. Burial will be at the Superior Cemetery. In lieu of flowers, memorials may be given in Michael's name.

The family of Michael Roach created this Life Tributes page to make it easy to share your memories.

Send flowers to the Roach family.