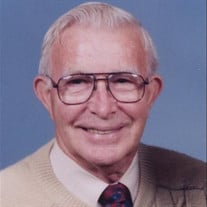 Milton Madsen, 95, of Spirit Lake passed away on Wednesday, April 10, 2019 at Accura Health Care of Spirit Lake. Memorial services for 95 year old Milton Madsen of Spirit Lake will be held at 10:30 a.m. Tuesday, April 16, 2019 at Grace Lutheran Church in Spirit Lake followed by military funeral honors presented by the American Legion Tempe Post #23 and VFW John W. Kidd Post #4514 of Spirit Lake. Private family graveside services will be held in the Lakeview Cemetery in Spirit Lake. A visitation will be held from 5-7 p.m. on Monday at the Schuchert-Lentz Funeral Home in Spirit Lake. Milton Herman Madsen was born December 25, 1923 on a farm northeast of Ringsted, Iowa to his parents, Herman R and Ingeborg Madsen. He had 5 sisters: Amelia Petersen, Clara Caswell, Gena Rasmussen, Mildred Paulsen, and Evelyn Kocheiser. Milton attended country grade school and graduated from Ringsted High School. He helped farm, participated in high school band and 4-H. He was baptized and confirmed at St. Paul’s Lutheran Church of Ringsted. He served with the U.S. Army Paratroops in WW II for 3 years after graduating from Jump School at Ft Benning, part-time in Europe. He is a lifetime member of VFW and American Legion. He married Phyllis Hansen on June 15, 1952 at St John’s Lutheran Church in Ringsted. They had a son, James, and a daughter, Jane. He farmed several years before going into the lumber business, and he retired from 23 years in the U.S. Postal Service in Arnolds Park and Aurora, Colorado. His hobbies were gardening, woodworking, and nature. He was always active in church and community. He is survived by his wife, Phyllis Hansen Madsen, son James and wife Rachel of Georgetown, ME, daughter Jane and husband Les of Littleton, CO, five grandchildren Chris, Alex, & Robin Madsen and Andrew & Jennifer Tonge, two step-grandchildren, Amy and Justin Streeb, five great-grandchildren Amelia and Malathi Madsen, Trinity Hadden Madsen, and Katie and Taylor Streeb, sister-in-law Louise Hansen, and many cousins, nieces, and nephews. He was preceded in death by his parents, all of his sisters and their husbands, his brother-in-law Duwayne Hansen, and two nieces, Donna Jean and Esther.

The family of Milton H. Madsen created this Life Tributes page to make it easy to share your memories.

Milton Madsen, 95, of Spirit Lake passed away on Wednesday, April...

Send flowers to the Madsen family.