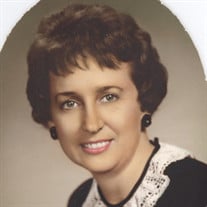 Nancy Blanchard, age 91, of Milford, passed away on August 16, 2016 at the Milford Care Center. Memorial services will be 11:00 AM on Tuesday August 23rd at First Lutheran Church in West Okoboji. Visitation will be 5:00 – 7:00 PM on Monday at the Schuchert-Lentz Funeral Home in Spirit Lake. Nancy Evelyn Drown, the daughter of Hampton Kidd Barker and Mary Evelyn (Nicola) Drown, was born on August 4, 1925 in Des Moines, Iowa. She graduated from Des Moines Roosevelt High School. On August 11, 1946 Nancy was united in marriage with Jesse Milton Blanchard in Des Moines. Nancy had worked as a seamstress in Lone Rock until they moved to Des Moines in 1969. In Des Moines, she was in charge of admission for Drake University and Drake Law School. She then worked as the secretary for the President of American Federal Savings and Loan. In 1986, Nancy and Jesse moved to Hot Springs Village Retirement Community in Arkansas. In 2008, they moved to Milford. Nancy attended First Lutheran Church in West Okoboji and she belonged to PEO. She enjoyed sewing. Left to cherish Nancy's memory are two daughters, Jill (Robert) Burns of Beaverton, Ontario and Cindy (Peter) Redmond of Spirit Lake; five grandchildren; four great grandchildren; a sister, Mollie (William) Dear of Sacramento, CA; and two brothers, Gary Drown of Portland, OR and David (Delores) Drown of Chicago, IL. She was preceded in death by her parents; husband, Jesse in 2015; and a daughter, Mollie Vierkant. Memorials may be made in Nancy’s name to First Lutheran Church, 1525 Three Cross Road, West Okoboji, IA 51331.

The family of Nancy Blanchard created this Life Tributes page to make it easy to share your memories.

Send flowers to the Blanchard family.