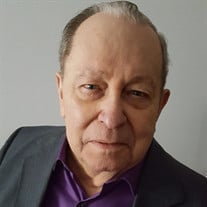 Nile E. Batman, 79, of Milford passed away on Saturday, May 26, 2018 at his home in Milford. Funeral services will be held at 10:30 a.m. Saturday, June 2, 2018 at the Spirit Lake United Methodist Church. Burial will be in the Lake View Cemetery in Spirit Lake. Visitation will be on Friday from 5 to 7 p.m. at the Schuchert-Lentz Funeral Home in Spirit Lake. Nile was born on May 11, 1939 to Ward E. and Frances E. (Sulsberger) Batman. He graduated from Le Mars High School in 1957 and attended Drake University. He worked as a traffic weight officer in Nebraska and Iowa. While working out of Oakland, Iowa, he met the love of his life, Kathy when he brought truckers to be fined by the justice of the peace (Kathy’s Mom). Nile and Kathy were united in marriage June 5, 1966 in Macedonia, IA. After their marriage he worked as a police officer in Council Bluffs and Atlantic, IA. He spent the majority of his career managing the family farms. Family was the most important part of Nile’s life. He was especially close to his mother. At the birth of both of his children, Jay and Julie, his mother would arrive at the hospital right at the crucial time to see the newborns, all without him calling her to come. They just had this connection. He loved to spend time in the basement with Jay building trains that covered the whole room. Kathy and Julie weren’t allowed to touch it, they could only build the pieces to be added to it. Nile was proud of Jay and Julie’s accomplishments and loved to tell people about them. The joy he had watching the family grow with the additions of Dante and Kari and then 3 grandsons knew no bounds. In 1988 Nile and Kathy moved to The Harbor on West Lake Okoboji. In 2006 they started splitting their time between Milford and the Villages in Florida. His love of cars was evident as he purchased a new one every year. He especially loved his convertibles (Mustangs and Corvettes.) He was an avid die-hard jazz fan. It was the only type of music he and Kathy agreed to listen to together. Nile also loved spending time in Okoboji in his boats, watching TV and movies, and eating out at many of the Lakes area restaurants and Eaton’s Beach in Weirsdale, Florida, and being in the company of his family. Nile is survived by his wife Kathy Batman of Milford, son Jay and wife Kari of Milford, daughter Julie and fiancée Dante Duphorne of Lake Mary, FL., and three grandsons Jack, Joseph, Gabe Batman of Milford and sister in law Betty Smith of Council Bluffs, IA He was preceded in death by his parents, sister in law Donna Smith and brother in law Blane Smith.

Nile E. Batman, 79, of Milford passed away on Saturday, May 26, 2018 at his home in Milford. Funeral services will be held at 10:30 a.m. Saturday, June 2, 2018 at the Spirit Lake United Methodist Church. Burial will be in the Lake View Cemetery... View Obituary & Service Information

The family of Nile E. Batman created this Life Tributes page to make it easy to share your memories.

Send flowers to the Batman family.