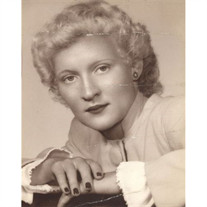 Patricia Ann Chrischilles (Pat), 86, passed away peacefully July 18, at Lakes Regional Healthcare in Spirit Lake, due to a long period of Alzheimer's disease. Pat was born June 20, 1928, in Winnipeg, Canada, to Paul and Verna Seeley, where he was transferred temporarily with the Metropolitan Life Insurance Company. Her parents were called back to the Iowa Great Lakes in 1929, when her Grandfather drowned in the boating accident between The Thriller and The Zipper. After a short period at the Lakes, Pats family moved to Fort Dodge, where she attended Corpus Christi School until 1944, when she moved to Algona, until her graduation from Algona High School in 1946. After graduation she attended The University of Iowa and later transferred to St. Catherine's College in St Paul, Minn, to study music. Her senior year, she met and married Julian Chrischilles on June 16, 1949, in St Paul. Together they raised a family in Algona and later Pat became office manager of Cable Communications of Iowa, where her husband Julian was a partner. One of Pat's hobbies was making tapes for her friends of music from the 20s, 30s and 40s. By chance, the owner of the local radio station KUOO, Paul Hedberg, heard Pats music and invited her to do a live Sunday morning show. In 1997, Paul put her on KAYL in Storm Lake, Iowa, where she taped all her shows from her home recording studio. After 5 years at KAYL she transferred her shows to KLGA in Algona, Iowa, where they ran every Sunday morning for an hour for 10 years. It was very well received and she had a loyal following. Pat started each show with Frank Sinatra and ended the same way by saying. "Join me next week for more Big Band, Blues and all that Jazz.... So long everybody". During this period Pat and Julie split their time between Ft Lauderdale, Florida and Lake Okoboji, where they built a home on Sunset Beach. Pat is survived by her husband of 65 years Julian Chrischilles of Okoboji; sons, David and Steve Chrischilles of Algona; son, John Chrischilles of Spencer; and daughter, Sarah Chrischilles of Portland, Oregon. She is also survived by her sisters, Dee Gergen of Minneapolis, Mary Boisjolie of Algona; and brother, Mark Seeley also of Algona. She also has two grandsons Sean and Austin Jacobson of Porland. There was a private family prayer service held at St Alban's Episcopal Columbarium. Schuchert Funeral Home were in charge of all arrangements.

Patricia Ann Chrischilles (Pat), 86, passed away peacefully July 18, at Lakes Regional Healthcare in Spirit Lake, due to a long period of Alzheimer's disease. Pat was born June 20, 1928, in Winnipeg, Canada, to Paul and Verna Seeley, where... View Obituary & Service Information

The family of Pat Chrischilles created this Life Tributes page to make it easy to share your memories.

Send flowers to the Chrischilles family.