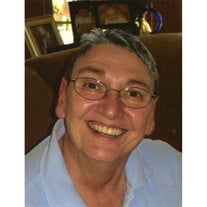 Patricia "Patty" Stackhouse, age 65, of Spirit Lake, passed away Wednesday, October 14, 2015, at Lakes Regional Healthcare in Spirit Lake. She was born on June 15, 1950, in Marshalltown, Iowa, to Donald and Mary Lou (Benson) Stackhouse. Patty graduated from Mankato High School in 1968, and enlisted to serve her country in the United States Army from 1976, until 1984. After being honorably discharged from the Army, Patty became a computer specialist for the United States Government for 22 years, before retiring in 2009. Patty was a life-long member of the American Legion. She enjoyed spending her spare time doing needlework and talking with her family. Patty is survived by her two sisters, Karen Van Guilder, and her husband, Robert of Spirit Lake, and Gayle Lee, and her husband, Russ of Mankato, Minnesota; nephews, Dustin Lee, and his wife, Tricia of N. Mankato, James Lee of Mankato, Rob Van Guilder, and his wife, Katie of Lakewood, Colorado, and David Van Guilder of Des Moines; niece, Mary Noah, and her husband, Tom of Fairmont; great-nieces and great-nephews, Alicia, Katelynn, Bryson, Marissa, Aaron, Mia, Cara and Ella; great-great-nephew, Ayden; and two cats that she adored, Abby and Big Boy. She was preceded in death by her parents, Donald and Mary Lou. A memorial service will be held at 11:00 a.m. Friday, October 23, 2015, at the Woodland Hills Funeral Chapel in Mankato, Minnesota. The Schuchert-Lentz Funeral Home is in charge of the arrangements.

The family of Patricia Stackhouse created this Life Tributes page to make it easy to share your memories.

Send flowers to the Stackhouse family.