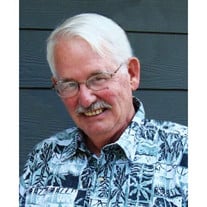 Benjamin "Paul" Arnold age 81, of Spirit Lake, passed away Friday, April 15, 2016, at Hawkeye Care Center in Spirit Lake. He was born on March 22, 1935, in San Pedro, California, to Benjamin and Tommie (Beck) Arnold. Paul graduated from Helix High School in1953, and the University of South Dakota in 1965, with a Masters Degree. He served his country in the United States Army in Alaska, during the Korean War. Paul was married to Millicent "Penny" Orr on September 9, 1961, in Spirit Lake. Two children were born to this marriage, Megan and Benjamin. Paul worked as a purchaser for Stylecraft, as a candle maker and taught technical theatre at North Michigan University, Dakota State University and Central Michigan University. Paul is survived by two children, Megan Arnold (John Gabriel) of Crystal, Minnesota, and Benjamin Arnold (Anita) of Sioux Falls, South Dakota; sister, Benna Lou Ball of Kailua, Hawaii; two grandchildren; and one great-grandchild. He was preceded in death by his parents; and sisters, Jane Baker and Jackie Dion. A memorial visitation for 81 year old Paul Arnold of Spirit Lake, will be held on Sunday, May 15, 2016, from 3:00 P.M. until 6:00 P.M., with a brief service at 3:15 P.M. at the Arrowwood Resort in the St. Andrews Room. In lieu of flowers, memorials may be given in Paul's name to the Nature Center. The Schuchert-Lentz Funeral Home is in charge of the arrangements for 81 year old Paul Arnold of Spirit Lake.

The family of Paul Arnold created this Life Tributes page to make it easy to share your memories.

Send flowers to the Arnold family.