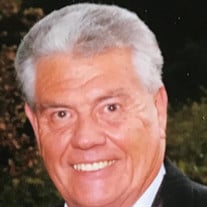 Paul Allen Johnson, 74, of Arnolds Park, passed away Sunday, September 5, at Lakes Regional Healthcare with family by his side. He graduated from Shenandoah High School in 1965 and began his post-secondary studies at Peru State. Then putting his studies on hold, he enlisted in the Marine Corps in September 1966. Paul was deployed to Vietnam in June of 1967 and on September 8, 1967, while on a reconnaissance mission, Paul was shot by an enemy sniper. Paul was eventually transferred to the Naval Hospital at the Naval Station Great Lakes in Great Lakes, Illinois where he spent many months recovering from his injuries. Paul was a distinguished veteran and was awarded the Purple Heart Medal, National Defense Service Medal, Vietnam Service Medal, Vietnam Campaign Medal and Rifle Sharpshooter Badge. After the war, Paul returned to Peru State, married Marianna Sober in 1969 and they raised two children (Chad and Katherine (Kate) in Farragut, Iowa. Upon graduation, Paul began working as a salesmen for Rath Packing Company and then in the fall of 1971, began a career with Eaton Corporation in Shenandoah, Iowa. In 1989, he married Dawn E. Hanzlick and shortly after they were married, he was transferred to Eaton Corporation Spencer Division where he was a procurement manager. Paul, Dawn and two of Dawn’s three children (Justin and Keri Hanzlick) made their home on Lake Minnewashta in Arnolds Park, Iowa. Paul retired from Eaton Corporation in 2006. Paul was an avid nature and wildlife lover and enjoyed sports. He was a huge fan of Kansas City professional teams and the collegiate play of the Nebraska Cornhuskers and all Iowa universities and colleges. He enjoyed golfing, “conservation” hunting and spending time with his many friends. Paul was a member of the Disabled American Veterans and a long standing member of the sportsman club- Twin Rivers Farm (aka- the 22 Club). Survivors include: sister -Connie and brother-in-law Gene Pratt (Manchester, Iowa); son - Chad Johnson (Lincoln, NE) and granddaughter Samantha; daughter - Kate Livingston, husband Rob (Council Bluffs, Iowa) and granddaughters (Emma, Isabel and Greta); step-daughter - Keri M. Hanzlick and Jeff Rost (Waukee, Iowa) and grandsons (Kyle and Derrick) and step-daughter - Heather E. Hanzlick-Jaacks and husband Rick (Winona, MN). Paul was preceded in death by his parents, wife Dawn E. Johnson and stepson Justin A. Hanzlick. The family we will be holding a private family interment with military funeral honors ceremony on Saturday, September 11, 2021 and a celebration of life will be announced at a later date. Memorials may be directed in Paul’s name to the Humane Society of Northwest Iowa or to the Disabled American Veterans (DAV- I Help Veterans)

Paul Allen Johnson, 74, of Arnolds Park, passed away Sunday, September 5, at Lakes Regional Healthcare with family by his side. He graduated from Shenandoah High School in 1965 and began his post-secondary studies at Peru State. Then putting... View Obituary & Service Information

The family of Paul Allen Johnson created this Life Tributes page to make it easy to share your memories.