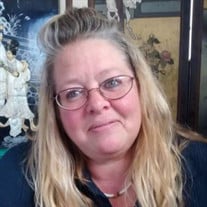 It is with extreme sadness that we announce the passing of our beloved mother and wife, Peggy Sue Cother on December 23, 2021, at age 57 after over a year-long battle with a rare neurological disease. Peggy Sue Wheeler was born April 10, 1964, in Lake City, Iowa, and she was a 1983 graduate of Lake City High School. Peg went on to spend her years raising her three boys Colt, Brent, and Adam. On June 3, 2003, she was united in marriage to Marvin Dean Cother Sr., at First Baptist Church Deadwood, SD. In 2005 they purchased 16 acres of land in Emmetsburg, Iowa where she would live out her years. Peg spent much of her working career at Ruthven Community Care Center as the head dietician aid for the last 15 years. She was loved by anyone who worked with her, and nobody was more dedicated and a harder worker then her. She enjoyed spending her time outside of work on the farm and with family. She enjoyed cross-stitching, gardening, and doing anything outdoors, fishing, camping, and with the occasional road trip to the casino. She also loved and collected all things M&M. Peg is survived by her loving husband Marvin Dean Cother Sr. and her children Colt Hample of Charlotte, TN, Brent Hample of Spencer, IA, Adam (Holly) Hample of Lake Park, IA, Christi Cother of Spirit Lake, IA, Dean (Ashley) Cother Jr. of Spencer, IA, Shayla (Chris) Adams of Spirit Lake, IA and Josh Cother of Lake Park, IA, her grandchildren and great-grandchild, brothers and sisters Russ (Dianne) Wheeler of Charlotte, TN, Timothy (Doris) Wheeler of Des Moines, IA, and Fred (Masako) Wheeler of Honolulu, HI. She was preceded in death by her parents Marilyn and Carrol, and sister Angela Wheeler. Pegs warm demeanor and loving heart touched the lives of so many and she will be dearly missed. Graveside burial services will be held on Friday, December 31, 2021, at Lakeview Garden Cemetery, 175th St., Okoboji, IA at 10:30 am. Flowers are welcome, and contributions can also be sent towards the funeral services as we carry out all of Peg’s final wishes.

It is with extreme sadness that we announce the passing of our beloved mother and wife, Peggy Sue Cother on December 23, 2021, at age 57 after over a year-long battle with a rare neurological disease. Peggy Sue Wheeler was born April 10, 1964,... View Obituary & Service Information

The family of Peggy Sue Cother created this Life Tributes page to make it easy to share your memories.

It is with extreme sadness that we announce the passing of our...

Send flowers to the Cother family.