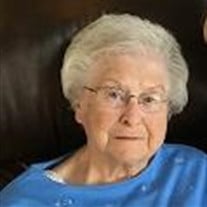 Peggy Lou Glover, 89, of St. Peter, MN formerly of Spirit Lake passed away on Thursday, July 20, 2017 at Rivers Edge Hospital in St. Peter, Minnesota. A visitation with the family present will be held on Sunday, July 23, 2017 from 12:00p.m. – 2:00p.m. at the Schuchert-Lentz Funeral home in Spirit Lake. A graveside service will take place at 3:00p.m. on Sunday in the Fairview Cemetery in Terril, IA. Peggy was born in Iowa Falls, Iowa (Hardin County) on November 10, 1927, to Melvin Walter and Nellie Ruth (Carter) Houser. At the age of 2 ½ they moved to Spirit Lake, Iowa, where she later attended the Spirit Lake Consolidated Schools, graduating with the class of 1946. Following graduation, she worked as a telephone operator for Bell Telephone until 1947. Peggy married Wayne Darwin Glover on June 29, 1947, in the Spirit Lake Methodist Church. Their early years were spent in the Terril community until 1980 when they moved to the Lakes Region. There were three children born to this union, Cynthia Joan, Marcia Kaye, and Randall Wayne. Following Wayne’s death, Peggy remarried Victor Baldock and lived for several years in Manitoba, CA. Due to declining health she returned to the USA to be near her children. Peggy is survived by Cynthia (Curtis) Koehlmoos of Springfield, NE; Marcia (Thomas) Applen of St. Peter, MN; Randall (Patricia) Glover of Blue Mountain, MS. She is also survived by 9 grandchildren and 17 great-grandchildren; sister, Doris Shelton; sister-in-law Rita Houser and nieces and nephews . Peggy was preceded in death by her husband, her parents, mother-in-law, Jessie Mae Glover, maternal and paternal grandparents, stepmother, brothers Richard Houser, Phillip Houser, sister-in-law Marilyn Jo Houser, and brother-in-law, Verne Shelton. In lieu of flowers, the family requests memorials be sent to the charity of your choice.

Peggy Lou Glover, 89, of St. Peter, MN formerly of Spirit Lake passed away on Thursday, July 20, 2017 at Rivers Edge Hospital in St. Peter, Minnesota. A visitation with the family present will be held on Sunday, July 23, 2017 from 12:00p.m.... View Obituary & Service Information

The family of Peggy Lou Glover created this Life Tributes page to make it easy to share your memories.

Send flowers to the Glover family.