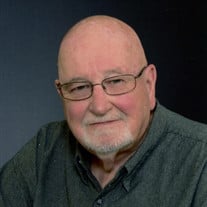 Philip E. Partello, 80, of Arnolds Park passed away from complications from a heart attack at the Avera McKennan Heart Hospital in Sioux Falls, SD. Services for Phil will be held 11:00 a.m. Saturday, April 17, 2021 at Calvary United Methodist Church in Arnolds Park. A visitation will be held from 5-7 p.m. on Friday the 16th at the church. Burial will be held in the Lakeview Gardens Cemetery in Spirit Lake. Phil was born on June 28, 1940 to Purl and Izetta (Johnson) Partello in Estherville, IA. He graduated from Estherville High School in 1958 and earned an associate degree from Iowa Lakes Community College in 1969. Phil’s professional career spanned many different areas and locations which included Knoxville, Ia; Perry, Ia; Ida Grove, Ia; Fenton, IL; Armstrong, Ia and retiring in Leroy, Mn. Phil spent his life and career as a Grain Marketer/Grain Elevator manager and chemical rep. Phil was highly respected in his field and offered his knowledge and talent often as an interim Manager for Farmland Industries. One highlight of his career would be the overseeing and building of a state of the art feed mill in Leroy, Mn that supplied feed for many livestock producers in that region. He was united in marriage to Mary Downing on January 16, 1971 in Omaha, NE. She preceded him in death on October 24, 2020 in Arnolds Park. In his retirement, Phil enjoyed driving the Rides bus in Spirit Lake where he made many friends. He was a member of the Calvary United Methodist Church in Arnolds Park. Phil was a devoted family man to his children and grandchildren. He was always in attendance at his grandchildren’s activities supporting them in whatever they were doing. In his free time, he enjoyed camping with Mary and traveling which included several winters in Lake Havasu, Az. Phil was often spotted on his morning walks on the bike trail. Recently Phil joined the YMCA where he made many new friends and enjoyed his morning exercise and coffee time. Phil had a love of cars and old hot rods from his generation. He had just recently purchased his dream car, a bright red Corvette 4 days before his passing and was so looking forward to taking it for rides with his friends and family. Left to cherish his memory are his children Robin (Ed) Lock of Milford; Daniel (Lynne) Partello of Prophetstown, IL; and Darin (Rachel) Partello of Spirit Lake; 8 grandchildren; 18 great grandchildren; brother Purl (Janice) Partello, Jr. of Spirit Lake; and sister Marcia Hill of Spirit Lake. He was preceded in death by his parents, wife, sister Ann and son David.

The family of Philip E. Partello created this Life Tributes page to make it easy to share your memories.

Philip E. Partello, 80, of Arnolds Park passed away from complications...

Send flowers to the Partello family.