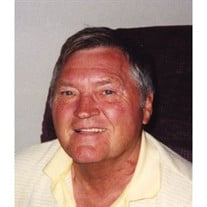 Phillip W. Carlson, age 78, of Milford, passed away Wednesday, July 24, 2013, at his home in Milford. He was born on January 23, 1935, in Cherokee, Iowa, to Einer and Tressa (Smith) Carlson. After attending community schools in Aurelia and LeMars, Phillip served his country in the United States Air Force from April 1954-November 1957, where he was a gunner on a B-36. He later was assigned to the Aircraft Electrical Maintenance Section which directed him to a lifelong vocation. He married Verona Kay Peck on June 24, 1956. Phillip then attended DeVry University, Chicago, and graduated in 1958 with a degree in electronics. Phillip worked for A&J TV service in Cherokee for approximately one year when the Cherokee Mental Health Institute offered him employment in their organization. He worked for CMHI the next 34 years, the first 17 in radio/television service and the last 17 years as their maintenance supervisor. Phillip married Shirley Anne Trigger on November 24, 1990. They moved to Milford, Iowa, in 1995 where they spent the last 17 years of his life. Phillip was very active in Ham Radio for 25 years and participated in countrywide Ham Radio Emergency Communication. He was honored for his service recognizing his contact with each of 3079 counties in the USA. Phillip was "Number 11" and his handle was WAØEVO. Phillip loved to golf! He especially loved golfing with his buddies, Jack, Bill and Roger. Phillip was a big fan of the Chicago Bears. He also enjoyed listening to music, dancing, traveling and quite often, singing in the car during his many travels. Phil's one wish before he died was that his body go to research so the medical community could learn more of the diseases of Emphysema & Histoplasmosis to further help others. His body was accepted into the medical education program at the Mayo Clinic in Rochester, MN. Phillip will be greatly missed by his two families: First, his children with Kay Peck Turnquist, daughter Corrine Lundell (Tom) of Cherokee and son Gary Carlson (Ellen) of Greer, SC; granddaughters, Christina Ostovic (Eric), Tracey Knowles (Duane), and Kerri Hooge (Jeremy); grandson, Eric Lundell (Kelly); and ten great-grandchildren. Sister, Christina Holmberg of Sweden. Nephew, Barry Carlson & nieces Tressa Love, Shawn Carlson & Sheila Miller. Second, the children of Shirley Carlson: Mitchell Trigger (Sue), Betsy Rueber (Joel), Terri Trigger, Paula Moir (Michael), Joel Trigger (Valerie), Kati Rivera and grandchildren Kate Duffert (McClain), Christopher Trigger, Coty Moir, Tabitha Sundquist (David), Ashley Trigger, Hannah Rueber, Erin Moir, Charlie Trigger & Anthony Rivera. Phil was preceded in death by his parents, Einer & Tressa, and brother, (Bertil) Chuck Carlson. A "Celebration of Life" service will in held in Phil's honor on August 17, 2013, at 2 PM. Services will be held at Schuchert Funeral Home, Highway 71 (2317 32nd St.), Spirit Lake, Iowa. All family and friends, who shared the life of Phillip W. Carlson, are invited to attend. His grieving widow Shirley requests in lieu of flowers, donations be made to a memorial fund in Phillip's name through Schuchert Funeral Home.

Phillip W. Carlson, age 78, of Milford, passed away Wednesday, July 24, 2013, at his home in Milford. He was born on January 23, 1935, in Cherokee, Iowa, to Einer and Tressa (Smith) Carlson. After attending community schools in Aurelia and... View Obituary & Service Information

The family of Phillip W. Carlson created this Life Tributes page to make it easy to share your memories.

Send flowers to the Carlson family.