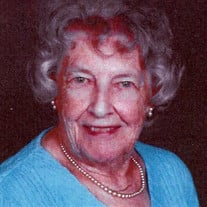 We announce the passing of our beloved mother Primrose (Prim) Selden Jackson a month shy of her 101st birthday on December 13, 2019 in Indianola, Iowa. Prim was born at home during the Spanish Flu epidemic January 14, 1919 in Cedar Rapids, Iowa to Marvin R. and Rose E. (Ferguson) Selden. She attended Cedar Rapids schools and St. Katherines Episcopal Girl’s School in Davenport, Iowa. She graduated from Coe College in 1940 with degrees in Chemistry and English and was a member of Chi Omega Sorority. In 1941 Prim was married to the love of her life, William Lester Jackson also of Cedar Rapids. During WWII they would reside in Arlington, VA and Temple, TX where they had their beloved son William L. Jackson, Jr. After WWII they moved to Emmetsburg, Iowa where their two daughters, (also beloved), Marcy and Betsy were born. In 1956 the family moved to Ames, Iowa. Prim worked as an editor for the Iowa State University Press for many years, a position she cherished. She was a member of St. John’s by the Campus Episcopal Church in Ames and a member of P. E. O. Chapter LN. Upon Prim’s retirement in 1973 they moved and rebuilt the family home on Lake Okoboji, Iowa. There, Prim was a member of St. Alban’s Episcopal Church, P. E. O. Chapter BE, the Lakes Art Center and the Okoboji Yacht Club. She was a 78-year member of the P.E.O Sisterhood. Prim is preceded in death by her loving husband William (Bill) Jackson in 2001 and her son Dr. William (Bill) Jackson in 2004, her parents Marvin and Rose Selden and her young brother Samuel Selden, her older sister Isabel (James) Smith, and her brother Marvin (Jean) Selden. She is survived by her loving, (also beloved), daughter’s Marcy (Doug) Harrison of Nevada City, CA; and Betsy (Clark) Raney of Indianola, Iowa; her sister Anne Miehe of Waterloo, Iowa; and her dearest sister-in-law Rosemarie (Ro) Jackson of Okoboji, Iowa. She had eight cherished grandchildren- Brett Callison, Heather (Chris) Horoschak, and Joe (Hilary) Callison, Alex (Brooke) Ruthenburg, Hollie (Mike) Sprague, and Andrew (DJ), Daniel (Sarra), and Erik Raney. She is also survived by 10 great grandchildren- Caitlin, Kendall, Connor, and Chloe Callison, Braxton and Gabriella Horoschak, Jackson and King Raney, and Madisyn and Kilyn Sprague. She leaves behind many nieces and nephews and a many dear loving friends. Prim was passionate about ISU sports, the NY Times Crossword Puzzles, Bridge, Mah Jongg and game nights with family. She had a long wonderful life and will be missed by her family and friends. She leaves behind some great memories and life lessons— none of her grandchildren would dare be caught wearing a hat in the house. Prim was truly a ‘prim’ and proper woman. Her name suited her so well. A special thank you to all the folks at Vintage Hills Assisted Living Center. Your kind help, friendship, and loving care meant the world to all of us—especially mother. Services will be held at St. Alban’s Episcopal Church in Spirit Lake, Iowa later in the spring or summer.

We announce the passing of our beloved mother Primrose (Prim) Selden Jackson a month shy of her 101st birthday on December 13, 2019 in Indianola, Iowa. Prim was born at home during the Spanish Flu epidemic January 14, 1919 in Cedar Rapids, Iowa... View Obituary & Service Information

The family of Primrose Selden Jackson created this Life Tributes page to make it easy to share your memories.

We announce the passing of our beloved mother Primrose (Prim)...

Send flowers to the Jackson family.