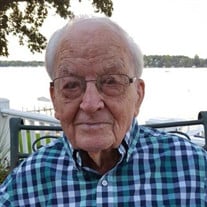 Randal Eakin, 101, of Spirit Lake passed away on Friday, February 28, 2020 at his home with family surrounding him. A funeral service for Randal will be held at 1:30 p.m. Friday, March 6, 2020 at the CrossWinds Church in Spirit Lake. Burial will take place in the Lakeview Cemetery in Spirit Lake. Visitation will be from 5-7 p.m. Thursday, March 5, 2020 at the Schuchert-Lentz Funeral Home in Spirit Lake and one hour prior to the service on Friday at the church. Randal was born to Bert and Helen Coral (Campbell) Eakin in Sibley, IA on September 17, 1918. He attended school in Sibley and then met and married Gudrun Hoiness in 1939. He was employed by the Royal Theater in Sibley operating a sound motion picture projection machine for several years. In April of 1944, he was inducted into the 3345th Signal Corps. After basic training he became a Tech 4 First Class Cook in the company mess hall supervising 4 cooks and 4 KP’s in the preparation and cooking of all the food for 360 men. He served overseas in WWII for 15 months in the Asiatic-Pacific Theater of Operations in Okinawa. During this time, he received a badge for Riffle Marksman, the Asiatic-Pacific Theater Service Ribbon with 1 Bronze Star, the Good Conduct Medal, and the World War II Victory Medal. Randal received and Honorable Discharge in April of 1946. Following his discharge, he worked as a Mason for 55 years. He was well known for his meticulous work and was asked to do special projects. Randal and his wife moved to Spirit lake in 1967 and retired in 1981. He was a member of the Baptist Church while living in Sibley and attended the Faith Free Church in Spirit Lake. Randal had a special passion for cars and keeping up his yard and driveway. He would wipe off his car every day whether or not it left the garage! He was still doing this well into his 90’s. He also enjoyed hunting and fishing in his younger days. He loved family gatherings and doing home improvement projects for his son, grandson and great grandchildren. He was a great role model for all the family. He always put everyone else first and never missed saying thank you for everything that was done for him. He could strike up a conversation with anyone wherever he was at the time. He will be greatly missed. Randal is survived by his son, Dale (Bonnie) Eakin of Spirit Lake; grandchildren Randy (Coni) Eakin of Spirit Lake; Cyndee Eakin of Spirit Lake; great grandchildren Nate Eakin of Spirit Lake; Kristen (Darren) Shannon of Spirit Lake; Kari (Matt) Schueneman of Johnstown, CO; Kevin (Christy) Johnson of Spirit Lake; great-great grandchildren Kayley Brown, Felicity Schueneman, Drake Schuenman, Abram Schueneman, Cadence Johnson and Khloe Johnson. He was preceded in death by his wife Gudrun, parents Bert and Coral Eakin, brothers Neil Eakin, Darrel Eakin and Virgil Eakin and sister Ava Knudson.

Randal Eakin, 101, of Spirit Lake passed away on Friday, February 28, 2020 at his home with family surrounding him. A funeral service for Randal will be held at 1:30 p.m. Friday, March 6, 2020 at the CrossWinds Church in Spirit Lake. Burial... View Obituary & Service Information

The family of Randal Eakin created this Life Tributes page to make it easy to share your memories.

Randal Eakin, 101, of Spirit Lake passed away on Friday, February...

Send flowers to the Eakin family.