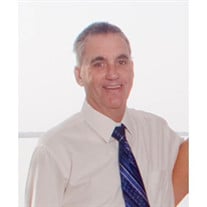 Randall Scott Ricklefs, one of four children born to Arnie and Shirley Ricklefs and the stepson of Curtis Gardner, was born August 11, 1953, in Algona, Iowa. He was baptized and confirmed in the United Methodist Church. Randy graduated from Algona High School in 1971 and then graduated from Wartburg College with a major in psychology. Randy had a love of the lakes area from spending his childhood summers on the north shore of Spirit Lake. It was here he met his future wife, Julie Heyer. Following his graduation from Wartburg College, he moved to Spirit Lake and co-opened with Bill Heil the popular franchise, Jake's Pizza. Jake's soon became the "fun" place to stop due to Randy's love of people and his entertaining personality. In 1978, Randy and Julie were united in marriage and raised three children, Kellie, Kyle, and Kami. Randy later co-owned with Ron Vincelli the Remington's Restaurant in Spirit Lake. Their life was full with work and family. Randy was a self-made business entrepreneur and pursued many interesting "career opportunities" including selling water purifiers, juicers, computer generated photos transferred to clothing and banners, video rentals, Merry Maids Cleaning Service, water balloon sling shots (not his finest idea....but so Randy), and selling insurance. Insurance was in his blood, following in the footsteps of his grandparents, father, and brothers, and continued to be a big part of his life. Randy was also very committed to the AA program and helping others with their addictions. In 1990, Randy's life changed starting with a Cursillo weekend and then going along with Kelly O'Brien to his first Steubenville Youth Conference. He realized his true passion was serving the Lord and teaching youth about the love and awesomeness of the Lord. He started out as a volunteer youth minister, working into a part time and then full time youth minister with St. Mary's Catholic Church in Spirit Lake. Randy was diagnosed with early onset Alzheimers in September of 2010 when he was 56 years old. His sense of humor and quirkiness remained, which was a tremendous strength and help to his many friends and family throughout the disease until he died on Sunday, May 31, 2015, at the Community Memorial Health Center in Hartley, Iowa. A Memorial Mass will be 4:00 pm on Thursday June 4th at St. Mary's Catholic Church in Spirit Lake. Following the Mass there will be a Celebration of Life and sharing at the VFW. In lieu of flowers memorials may be made in Randy's name to the Gentiva Hospice, RESIPTE Angels or the Hartley Care Center. The Schuchert-Lentz Funeral Home is Spirit Lake is serving the family. Randy will be cherished for his charismatic personality, his willingness to help others, his ODH (obsessive duck hunting), and his ability to make others laugh. One of his dreams (other than Dancing with the Stars), was to be a stand-up comedian. Randy was preceded in death by his niece, Jenny Ricklefs, parents, and grandparents. "Well done, thy good and faithful servant...enter thou into the joy of the Lord." Matthew 25:21

Randall Scott Ricklefs, one of four children born to Arnie and Shirley Ricklefs and the stepson of Curtis Gardner, was born August 11, 1953, in Algona, Iowa. He was baptized and confirmed in the United Methodist Church. Randy graduated from... View Obituary & Service Information

The family of Randall Ricklefs created this Life Tributes page to make it easy to share your memories.

Randall Scott Ricklefs, one of four children born to Arnie and...

Send flowers to the Ricklefs family.