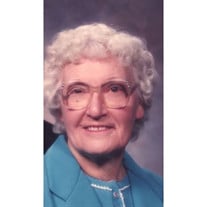 Rena Daisy Stransky, age 96, of Spirit Lake, passed away on Monday, April 29, 2013, at Hilltop Care Center in Spirit Lake. She was born on February 20, 1917, in Montour, Iowa, to Ray and Daisy Halverson. Rena was raised on the family farm and was the oldest of four children. She was united in marriage to Leonard S. Stransky on December 31, 1941, while he was stationed with the U.S. Coast Guard in Sheepshead Bay Brooklyn, New York. They lived in Brooklyn where she worked on Broadway in Manhattan at an accounting position. They moved to Iowa to help support the family while Leonard completed his education at Iowa State University. They moved to Spirit Lake in 1952, starting her 35 year career as the Spirit Lake Community Schools secretary to the school board. Rena was a member of Eastern Star, the Museum Board, Legion Auxiliary, Retired School Personnel, Cemetery Board, the United Methodist Church, the Farmer's Market, the Ground Observer Corp, the Senior Center, where she was instrumental in the fund raising and the treasurer and buyer for the Lakes Regional Healthcare Gift Shop. She was always willing to lend a hand, including a Den Mother for Ken's Cub Scouts. Rena was always proud of her garden and honey bees. Rena is survived by her two sons, Kenneth Stransky of Bloomfield, Michigan, and Richard Stransky of Spirit Lake; two grandchildren, Robin Yerrington of South Bend, Indiana, and Yuri S. LaPointe of Bloomfield, Michigan; three great-grandchildren, Kendra, Eve and Meg Yerrington of South Bend, Indiana; two foster sons, Kenneth and Ronald Brown. She was preceded in death by her parents; her husband, Leonard; her sisters, Irene and Pauline; brother, Arthur; and grandson, Thomas. A memorial service will be held at 11:00A.M. Monday, May 6, 2013, at the United Methodist Church in Spirit Lake. A memorial visitation will be held Sunday, from 2:00P.M. until 4:00P.M. at the Schuchert Funeral Home. The Schuchert Funeral Home is in charge of the arrangements.

Rena Daisy Stransky, age 96, of Spirit Lake, passed away on Monday, April 29, 2013, at Hilltop Care Center in Spirit Lake. She was born on February 20, 1917, in Montour, Iowa, to Ray and Daisy Halverson. Rena was raised on the family farm and... View Obituary & Service Information

The family of Rena Stransky created this Life Tributes page to make it easy to share your memories.

Send flowers to the Stransky family.