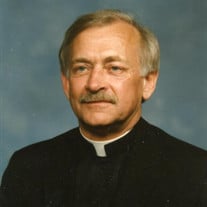 Father Albert O. Grendler, Jr., died peacefully on Monday, August 6, 2018, at Holy Spirit Retirement Home, Sioux City, Iowa. Mass of Christian burial will be at 11 a.m., Friday, August 10 at St. Mary's Catholic Church, Spirit Lake, Iowa. Fathers Paul Kelly, Larry McCarty, and fellow priests of the Diocese of Sioux City will concelebrate the funeral. Burial will follow at 3:30 p.m. at Calvary Cemetery, Sioux City. Casket bearers are: Tim Cronin, Bill Elling, Joe Fitzgibbons, Dennis McCarthy, Brian Petersen, and Ken Todd. Visitation will be Thursday, August 9, from 4 to 7 p.m. at St. Mary's Church, and a vigil prayer service at 7 p.m. Father Paul Kelly will preside. Father Grendler was born December 15, 1932, in Yankton, SD to Albert O. Grendler, Sr. and Winifred Hansen Grendler. His childhood was spent in Jefferson, SD, and Sioux City. He attended St. Peter's Catholic School, Jefferson, Immaculate Conception and St. Joseph grade schools in Sioux City. High school years were at Trinity High and Heelan High School graduating in 1951. He received the Bishop Mueller Scholastic Excellence Award. Fr. Al was a 1955 graduate of St. Benedict's College, Atchison, Kansas and Mt. St. Bernard Seminary, Dubuque, in 1959. He was ordained to the priesthood on May 16, 1959, at the Cathedral of the Epiphany, Sioux City. Through his years of active ministry, he served many communities of Northwest Iowa. Immediately after ordination he served as a temporary chaplain at St. Joseph Mercy Hospital, Sioux City. His parish work included: Sacred Heart, Spencer 1959-64; St. Joseph's, LeMars 1964-66; Sacred Heart, Sutherland and St. Anthony, Primghar, 1966-67; Our Lady of Good Counsel, Holstein, 1968-69; St. Francis, Sioux City, 1969-74; St. Patrick's, Estherville, 1975-86; Corpus Christi, Fort Dodge, 1986-93; St Mary's, Spirit Lake, 1993-04. He also served as the Dean of the Northeast Deanery of the Diocese. As a life-long learner, Father completed graduate studies at the University of Iowa from 1966-1967, receiving a Masters of Arts from the School of Journalism. His research subject was the role of Catholic newspapers in Iowa. As a faculty member of Briar Cliff College from 1969-71, he taught journalism and delighted in teaching future journalists to research and write in a factual, concise manner. In 1986 he received a Doctorate of Ministry from United Theological Seminary, New Brighton, Minn. His doctoral work was concentrated on the Old Testament. He felt blessed to study in Rome and Israel. Father traveled all over the world, but his favorite place was the Iowa Great Lakes. He enjoyed many days at the cottage he owned with his sister Mary on Big Spirit Lake. Father retired from parish leadership in 2004, but enjoyed assisting his fellow priests serving often at St. Joseph's, Milford. For retirement he settled in Okoboji, and enjoyed the seasons, people, and activities of the Lakes’ area. He volunteered with Meals on Wheels, and was always ready to assist the sick and needy. An avid reader he was a frequent patron of the Spirit Lake Library. He was ruthless at cards (learned from his father); the competition of a game of bridge, hearts or shanghi was something he greatly enjoyed. He moved to Holy Spirit Retirement Home in April 2016, after a hip fracture to be closer to his family. There he reconnected with high school and family friends, fellow priests, former parishioners, and made many lovely new friends. He attended daily Mass, and most afternoons you could find him in the chapel praying for all of his special intentions. During his lifetime Father Al had many nicknames. To his many nieces and nephews, he was affectionately known as "Alex" and to his sisters and cousins as "Junior." His dedication to his parents and family was unending, as he was their "pastor." Survivors include his sister Emilie (Sally) Grendler who resides at Holy Spirit Retirement Home. Other survivors include the McCarthy and Persinger nieces and nephews, his devoted band of priest brothers who formed his Caritas Group, and the parishioners of St. Mary's Church, his last parish. He was preceded in death by his parents; his sisters Mary McCarthy, Joan Shaw, and Dorothy Persinger; niece Cathy Persinger and nephew Tom McCarthy. The family thanks the many helping hands at Holy Spirit who assisted him during his final years. Memorials may be directed to St. Mary's Church, Spirit Lake; Holy Spirit Retirement Home; or Sprit Lake Library. Also, doing a good and anonymous deed in his memory would be welcomed. As he often said, "Let us pray for one another."

The family of Rev. Albert Grendler created this Life Tributes page to make it easy to share your memories.

Send flowers to the Grendler family.