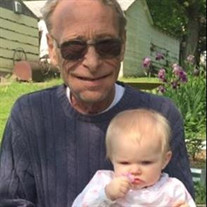 Richard “Kirk” Ewen, 66, of Arnolds Park passed away on Thursday, June 13, 2019 at his home. Family will greet friends from 5-7 p.m. on Thursday, June 20, 2019 at the Schuchert-Lentz Funeral Home in Spirit Lake. Burial will take place in the Okoboji Cemetery in Arnolds Park. Kirk was born on July 8, 1952 to Richard “Skip” and Dorothy (Wilson) Ewen. He graduated from Arnolds Park High School in 1970. Upon graduation he worked for his father Skip’s construction business eventually taking it over until his retirement. Kirk was united in marriage to Virginia Quinn on February 12, 1977 in Spencer, IA. Kirk loved the outdoors and passed this love onto his sons. His summers consisted of fishing and he could often be seen heading out before the sun came up in his beloved Crestliner boat. Fall consisted of duck and pheasant hunting whenever possible until the ice was “officially” frozen then ice fishing season would begin. Kirk was known as the Iowa Great Lakes “iceologist”. A tradition was started in 1916 by his great-grandmother Lou Wilson of keeping track of the ice freeze and thaw dates on East and West Okoboji. Lou passed this duty onto her son Harry “Zeke” Wilson who then passed it onto Kirk in 1994 who carried it through the rest of his life. Kirk would do anything for his boys and loved more than anything teaching them how to hunt and fish. Karl and Alex started accompanying their dad at an early age spending nights in the duck boat and evenings in his Ice Shack. They could often be seen following their dad through the cattails on the many public hunting grounds chasing after that elusive rooster. Kirk would also build and design anything for his family. Whether it was the numerous bird houses or being the resident handyman, Kirk could do it all. He is survived by his wife Virginia Ewen of Arnolds Park; sons Karl Ewen of Spirit Lake; Alex Ewen of Estherville; granddaughter Clarabelle and sister Cynthia of California. He was preceded in death by his parents Skip and Dorothy along with his sister Susan.

The family of Richard "Kirk" Ewen created this Life Tributes page to make it easy to share your memories.

Richard “Kirk” Ewen, 66, of Arnolds Park passed away on Thursday,...

Send flowers to the Ewen family.