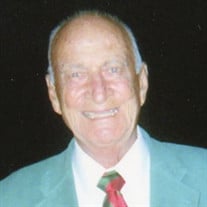 Dr. Richard Earl Geiger, 92, a resident of Okoboji, formerly of Cedar Rapids, passed away on Monday, February 19, 2018 in Okoboji. A memorial service will be held on Saturday, July 14, 2018 at 11:00 a.m. at First Lutheran Church in West Okoboji. He was born a fraternal twin with Robert C. Geiger in Sheldon. He graduated from Sheldon High School in 1942. In 1944 Richard and Robert enlisted in the U.S. Navy and proudly served their country until being honorably discharged. Richard then attended the University of Iowa, graduating in 1950 with a Doctor of Dental Surgery Degree. He took his residency to become an Oral Surgeon at Indiana University. In 1952, he opened his Oral Surgery practice in Cedar Rapids retiring in 1995. Richard was a past president of 1987-1988 Iowa Dental Association; the Linn County I Club and Eastern Iowa Executive Club. He also served on many boards and organizations. He was a member of the Masons for 58 years and former member of Elmcrest Country Club. He was especially proud and honored to be invited to become a member of Pierre Fauchard Academy, American College of Dentists and International College of Dentists. After retiring, the Geiger’s moved to Okoboji to live while also spending their winters at their condo on Longboat Key, Florida. Richard enjoyed playing golf and bridge, going fishing and boating, attending Hawkeye football games and rooting for the Cubs, reading, traveling, attending summer theatre plays in Okoboji and spending time with family and friends. Left to cherish his memories are his loving wife, Shirley (Thompson), of 42 years, of Okoboji; his daughter Valerie (Steve) Padia; his 2 grandchildren, Bradley and Torie (Elshia) Davis and great granddaughter, Addison all of Hurst, TX. Also close to him were Julie and Dan Doxtad of Galva and Gary and Carolyn Berkland of Spirit Lake. Memorial contributions may be made to the Spirit Lake VA Clinic or to the University of Iowa Foundation C/O College of Dentistry in Richards’ name.

Dr. Richard Earl Geiger, 92, a resident of Okoboji, formerly of Cedar Rapids, passed away on Monday, February 19, 2018 in Okoboji. A memorial service will be held on Saturday, July 14, 2018 at 11:00 a.m. at First Lutheran Church in West Okoboji.... View Obituary & Service Information

The family of Dr. Richard Earl Geiger created this Life Tributes page to make it easy to share your memories.

Send flowers to the Geiger family.