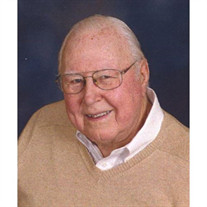 Richard "Dick" Kibbie, age 79, of Arnolds Park, passed away Tuesday, May 28, 2013, at Avera Heart Hospital in Sioux Falls, South Dakota. He was born on September 3, 1933, in Emmetsburg, Iowa, to Joseph and Gertrude (McGarvey) Kibbie. Dick graduated from Ayrshire Consolidated Schools in 1951. He served his country in the United States Army. Dick farmed until 1981, when he went to work for Smith's RV. Dick was a member of the American Legion Post #173 in Ayrshire and St. Mary's Catholic Church in Spirit Lake, where he was active in the Knights of Columbus. He enjoyed spending his spare time reading. Dick is survived by his brother, Emmett Kibbie, and his wife, Memphis of Emmetsburg; cousin, Jack Kibbie, and his wife, Kay of Emmetsburg; and many nieces and nephews. He was preceded in death by his parents; an infant sister, Maxine; two older sisters, Alice Mae and Marge. A funeral Mass will be held at 10:30A.M. Saturday, June 1, 2013, at St. Mary's Catholic Church in Spirit Lake. Visitation will be held Friday, from 5:00P.M. until 7:00P.M., with a Vigil for the Deceased at 7:00P.M. at the Schuchert Funeral Home in Spirit Lake. Burial will be at Calvary Cemetery in Ayrshire, Iowa. The Schuchert Funeral Home is in charge of the arrangements.

The family of Richard Kibbie created this Life Tributes page to make it easy to share your memories.

Send flowers to the Kibbie family.