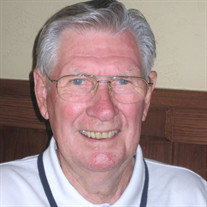 Richard Kimmel, 92, of Okoboji passed away on Thursday, August 23, 2018 at Muse Norris Hospice House in Mason City, IA. A private family funeral will be held at the Schuchert-Lentz Funeral Home in Spirit Lake. Richard Lee Kimmel (Dick) was born on February 2, 1926, in Sheldon, Iowa, son of Benjamin H. and Bertha (Brinkman) Kimmel. He grew up and attended school in Sheldon, graduating from Sheldon High School in 1943, followed by attending Sheldon Junior College. On October 24, 1948, he was united in marriage to Clara Louise Hagedon at the Methodist Church in Rock Rapids. He and Clare lived for many years on the Kimmel family farm near Sheldon. They became the parents of two daughters, Carla and Debra. Dick was a member of the Sheldon Church of the Brethren where he was a deacon, an adult Sunday School teacher and an active member on several church boards. More recently, he became a member of the Methodist Church in Spirit Lake, Iowa. Growing up, Dick worked on the family farm near Sheldon and continued there for many years. He also held positions as the Sioux County Field Tax Assessor and Commodity Inspector for the federal government. In 1971, he became a full-time insurance sales agent and was active in this business for over 40 years. His company transferred him in 1977 to the Dickinson County insurance office, and the family moved to the Lake Okoboji area. He and Clare lived in a condo on Brooks Golf Course for many years. In addition to enjoying golf and tennis, Dick served as president of the community association. They then moved to Pelican Ridge in Arnolds Park where they lived for 9 years. After Clare’s death in 2016, Dick relocated to Mason City, Iowa, to be closer to his daughter Deb and family, residing at Kentucky Ridge Assisted Living as well as Good Shepherd. Dick always had an intense interest in airplanes – building and flying radio-controlled models, as well as accumulating knowledge about all types of airplanes. As a young man, he served in the Civil Air Patrol. At the Spirit Lake Airport, he was a landing fee collector and liaison with the pilots who frequented the local airport. Dick leaves to cherish his memory his two daughters, Carla and her husband Brent Anderson of Newport Beach, California, and Deb and her husband Mark Bertsch of Mason City, Iowa, and three grandchildren – Carrie of Runnells, Iowa, Mathew of Des Moines, Iowa, and Joshua of Newport Beach, California. He was also blessed with one great-granddaughter, Addison Clare. Preceding him in death were his parents, his wife Clare, three brothers – Loren, Dayton, and infant Marvin, and one sister – Norma.

The family of Richard Lee Kimmel created this Life Tributes page to make it easy to share your memories.

Richard Kimmel, 92, of Okoboji passed away on Thursday, August...

Send flowers to the Kimmel family.