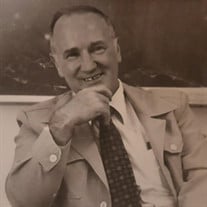 Richard LeRoy Morris passed away on February 22, 2020 surrounded by his family. Services have been postponed at this time. Richard, more commonly known as Dick, was born on January 1, 1927 to Roy and Marie (Donaldson) Morris in Triumph, MN. Dick graduated with honors from Garfield-Webb High School in the spring of 1944 and enlisted in the Navy Aircrew Program in August of that year where he trained to be a flight radio operator. Upon discharge, he enrolled in Buena Vista College, receiving a BS in Mathematics and Science in 1950. Richard wasn’t so focused on academics, though, that he didn’t notice the cute girl sitting on the steps of the library in Webb, Iowa. This turned out to be Shirley Lavonn Smith. Four years after that fateful meeting, Richard and Shirley married at the Methodist Church in Webb, IA. Shirley was also a teacher, and they soon moved to Everly, IA to accept their first teaching positions. Richard taught high school math and science in Everly for two years. They then moved to Rolfe, where he taught high school math for four years. In 1956 they moved to Spirit Lake, IA where Richard taught high school math and computer science until his retirement in 1988. He worked to develop a rigorous math curriculum and standards at SLHS that influenced faculty both locally and nationally. Because of his excellence as an educator, he was nominated and selected to attend summer courses at the University of Northern Iowa given by the National Science Foundation to help math and science teachers strengthen their instruction. Subsequently, he was selected to attend an Academic Year Institute at UNI where he received his Master’s degree in one year. More than his commitment to math, Dick was deeply devoted to his students. He cared so much about them that even thirty years after retirement, students would approach him in the grocery store and he would remember their names and where they sat in class. Not only did Dick serve students, he served the teachers, as well. He worked on Joanne Gruhn’s successful campaign to become a state legislator. Together they wrote legislation to allow for the early retirement of teachers, which passed and was put into law. He was a strong advocate for increasing the salaries of teachers to become competitive with other professions and to allow teachers to have year-round employment. As a result of his devotion to curriculum, students, and teachers, in 1968 Dick received the Outstanding Iowa Mathematics Teacher award from the Iowa Academy of Science. From 1972-1974 Dick was the Region III director of the Iowa Council of Teachers of Mathematics. He was head of the K-12 Mathematics Department for Spirit Lake from 1960-1988. In 1980 Dick was honored to serve as Grand Marshall of the Spirit Lake Homecoming celebration. And in 2006 he was inducted into the first annual Spirit Lake Education Hall of Achievement in honor of his role as an educator in the Spirit Lake schools. In addition to serving the education community, Dick served the wider Spirit Lake community, as well. He was an influential member and president of East Lake Improvement Corporation, president of Spirit Lake Friends of the Library, a lifelong member of Kiwanis, serving as president of the Golden Kiwanis Club for many years, and a member of the First Presbyterian Church, where he served as elder and deacon. What drove Richard to serve his community so passionately, was his heart for people and his desire to make a difference in the world. In everything he did, he loved to learn and pass that knowledge on. In retirement, he loved good conversation, walking the local trails, playing cards, and traveling with Shirley. His passion for math fed his many hobbies including painting, designing, building homes, and accomplishing home projects. He was preceded in death by Shirley, his wife of 65 years, his father, mother and son, Jeff. Dick is survived by his daughters Marga and Debby and his son Mike (Lisa), his four grandchildren Christina, Kym (Adam), Ben and Megan (Jesse), his six great-grandchildren Lauren, Nathan, Isaac, Blake, Camella and Ian, his sisters Betty Miller and Phyllis Taylor and many nieces and nephews. He has donated his body to the Whole Body Foundation at the Mayo Clinic in Rochester, MN to be used for the education of medical students. Even in death, he continues to teach. In lieu of flowers, donations can be made to Spirit Lake School Foundation, PO Box 46, Spirit Lake, IA 51360, Attn: Richard Morris Scholarship Fund

Richard LeRoy Morris passed away on February 22, 2020 surrounded by his family. Services have been postponed at this time. Richard, more commonly known as Dick, was born on January 1, 1927 to Roy and Marie (Donaldson) Morris in Triumph, MN.... View Obituary & Service Information

The family of Richard Leroy Morris created this Life Tributes page to make it easy to share your memories.

Send flowers to the Morris family.