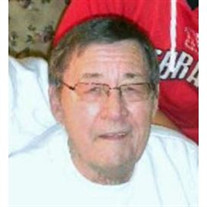 Richard "Dick" Ray Zellaha, 76, passed away Sunday, May 10, 2015, at the Hemingford Community Care Center in Hemingford, Nebraska, after a year long battle with health issues. Dick moved to Hemingford from Spirit Lake, Iowa in May of 2012, to be closer to his daughter and family. Dick was born on November 4, 1938, in Spirit Lake, Iowa, to Raymond and Beatrice (Hagedorn) Zellaha. He attended school in Spirit Lake, graduating in 1957. At an early age of 5, he had a great interest for boxing. I recently asked Dad why he became interested in boxing and he said, "Well, I thought I was tough!" followed by a chuckle. He boxed as an amateur boxer at the age of 17 and was known as the "Great Lakes Mauler". One of the highlights of his career was boxing against George Cruz, who later became a professional and boxed against the great Sugar Ray Robinson who was a welter and middle-weight champion of the world. I believe the story was told to me that George had indicated to Dad that he should just lie down and call it good. All said and done, it only cost him two teeth. Dick had the opportunity in the early 60's to meet boxers Jersey Joe Walcott, Sonny Listen, and Angelo Dundee, who was Muhammad Ali's trainer. He spearheaded Alliance Nebraska's 1st boxing smoker at the City Auditorium in 1978, promoting young boxers in the panhandle. Dick also loved animals, raising rabbits, homing pigeons, and parakeets most of his life. Dick married Marilyn Johnson on September 8, 1957, in Spencer. There were 2 children born to this family, Jodi and Shane. He worked for his father at the Sinclair Oil Station, owned the Rec Center in Spirit Lake, and also helped with his Dad's taxi service for a number of years. In 1964, the family moved to Spencer, Iowa, where Dick was employed at JC Penney. In 1971 they were transferred to Denison, Iowa... in 1972 to North Platte, Nebraska... and in 1973, to Alliance, Nebraska where he managed the JC Penny store on Box Butte Ave. He was known as "Mr. Z" at the top of the Butte. Dick enjoyed doing radio ads at KCOW to promote sales at his store and also dabbled in local sports broadcasting. In 1987, he was the Mayor of Alliance, previously serving on the city council for several years. Dick went to work at KMart in 1981. In 1990 he moved back to Spencer and then later Spirit Lake, where he made his home for 21 years. Dick is survived by his daughter, Jodi (Dave) Roes of Hemingford, NE; son, Shane (Diana) Zellaha of Spencer; grandchildren, Zack (Mindy) Vasa of Rock Springs, WY, April (Chase) Olsen of Casper, WY, Brody Roes of Alliance, NE, Tyson (Kristen) Zellaha of Cincinnati, OH, and Shayna (Cory) Ege of Cherokee, IA; great-grandchildren, Zackery, Tabitha, Mary, Leslie Vasa and Landon Ray Zellaha; brothers, Virgil (Janice) Zellaha of Lewellen, NE, and Dennis Zellaha of Milford, IA; and numerous nieces and nephews. He was preceded in death by his parents; and son-in-law, Randy Vasa. A graveside service will be held at 11:00 A.M. on Saturday, May 30th, 2015, at Lakeview Cemetery in Spirit Lake with a luncheon to follow at the VFW. Memorials may be given to the Spirit Lake Volunteer Fire Department, 2001 Peoria Ave., Spirit Lake, Iowa, 51360.

Richard "Dick" Ray Zellaha, 76, passed away Sunday, May 10, 2015, at the Hemingford Community Care Center in Hemingford, Nebraska, after a year long battle with health issues. Dick moved to Hemingford from Spirit Lake, Iowa in May of 2012, to... View Obituary & Service Information

The family of Richard "Dick" Zellaha created this Life Tributes page to make it easy to share your memories.

Send flowers to the Zellaha family.