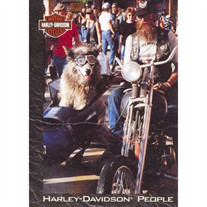 Robert L. "Bobcat" Anderson, age 63, of Terril, Iowa, passed away Thursday, November 21, 2013, at Lakes Regional Healthcare in Spirit Lake, Iowa. He was born on April 2, 1950, in Minneapolis, MN, to Lewis and Verna (Kerkhoff) Anderson. He grew up in Morgan, MN, and graduated from Morgan High School in 1968. Before settling into his home in Terril, Bobcat lived and worked in several different states. In the 1970's he was an active member of the New Ulm Battery. His last job was with AGCO in Jackson, MN. When he was not working, you could find Bob riding and working on his bikes. Bob loved his Harley's, his wolves, his trips to Sturgis and riding with his friends. Bobcat was honored to be one of many bikers featured on a Harley trading card as well as being in several magazines with his wolf. Bob is survived by his children, Kristine (Mike) Roberts of Red Wing, MN, and Gregory (Nikki) Scholl of Visalia, CA; siblings, Linda (Donnie) Borgen of Elko, MN, Craig (Linda) Anderson of Courtland, MN, Doug (Dee) Anderson of Chippewa Falls, WI, Mike Anderson of Morgan, MN, Sue (Scott) Heuchert of Sleepy Eye, MN, Mark Anderson of Morgan, MN, and Beth Piepenburg of Willmar, MN; eight grandchildren; nieces; nephews; and many wonderful close friends. Bob was preceded in death by his parents; infant brother, Gregory; sister-in-law, Percy Anderson; brother-in-law, Don Piepenburg. A celebration of Bobcat's life will be held on November 29, 2013 at 1:00pm at the American Legion in Terril, Iowa. Visitation will be held Friday, from 11:00am - 1:00pm. at the American Legion in Terril. In lieu of flowers, memorials to the American Legion of Terril, Iowa, are preferred. The Schuchert Funeral Home is in charge of arrangements.

The family of Robert "Bobcat" Anderson created this Life Tributes page to make it easy to share your memories.

Send flowers to the Anderson family.