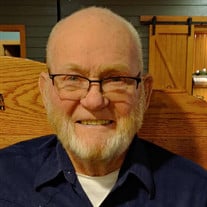 Spirit Lake, IA Robert Chris Ingwersen, 1929-2020 Robert Chris Ingwersen; the son of Julius and Irma (Carstensen) Ingwersen was born December 24, 1929 in Lake Park, IA. He attended school in Lake Park up to the 10th grade. Bob served in the U.S. Navy from 1948-1952. He served on the Laertes and the USS St. Paul, serving under Admiral John McCain Sr. Bob was a machinist and was honorably discharged. After leaving the Navy, he worked for the American Can Company in San Francisco. Bob and Neva began farming northeast of Spirit Lake in 1954 and farmed until Bob retired in 1992. He was a soil commissioner in Dickinson County for 24 years. He was a member of the VFW serving as Post Commander and a member of the American Legion. He served on the Jackson Elevator Board and was a member of the Jackson Flying Club. After retiring, Bob enjoyed trucking and restoring old tractors Bob met his future wife, Neva, at the roller-skating rink in Arnolds Park. They were married July 1, 1951. To this union, they were blessed with three sons; Alan Ingwersen and his children Scott and his husband Fern, Nicholas and Andrew and his fiancé, Kristen, Curt Ingwersen and his wife Kim with their children Amber, Ross and his wife Sara with their children Skylar, Rylee and Kolbie, Ashley and her husband Derek with their children Jayse, Victoria and Keaton, Autumn and her husband Nathan with their children Beckett, Braxton, Mataya and Hudson, and Kyle and his wife Britleigh with their children Kyven and Leo, and Mark Ingwersen and his wife Kim with their children Laura Slawson and her husband James and Sarah Fonken with her husband Brandon and their children Brayden, Tenslee and Lucy. He is proceeded in death by his wife, Neva, parents, grandson Wesley Ingwersen, brother in law, Irwin Bates and nephew Russell Bates. Bob passed away on Saturday, October 31, 2020 at Lakes Regional Healthcare in Spirit Lake. A private family funeral service will be held at the Schuchert-Lentz Funeral Home in Spirit Lake. Burial will be held in the Silver Lake Cemetery, Lake Park, IA. In lieu of flowers memorials may be sent to the American Legion in Lake Park or the VFW Women’s Auxiliary in Spirit Lake in Bob’s name.

The family of Robert "Bob" Chris Ingwersen created this Life Tributes page to make it easy to share your memories.

Send flowers to the Ingwersen family.