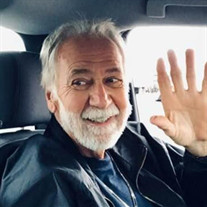 Robert (Bob) Bringle passed away on October 8th, not long after his 70th birthday, following a lengthy battle with cancer. Robert was born on September 4, 1950 in Estherville, the son of Lubie and Cora (Hutton) Bringle. Robert began his career in law enforcement in Des Moines as part of the undercover narcotics division. He eventually found his way back to Spirit Lake as a Deputy Sheriff, and soon found himself dating a former classmate. That classmate was Alana (Loni), his future wife. They married on May 8th, 1982 and had two sons, Brayden and Brock. Robert’s career in law enforcement lasted for 35 years, where he policed with compassion and understanding. He was especially proud of his work with victims of domestic violence and as a school resource officer and DARE teacher. Robert was loved and known in the community because of his volunteerism. He was a fixture in youth sports, having coached his sons and by extension dozens of others in baseball and football. An accomplishment, because Robert certainly wasn’t an athlete. Robert was especially fond of theater, whether it was behind the scenes running lights and sound, directing community and school plays for 8th through 12th graders, or building the sets with the help of his crew. These were some of his fondest memories and longest lasting friendships. Robert also had another love: construction and woodworking. He was always building, sometimes out of necessity, sometimes to help a friend of family member, but always because he enjoyed it. This sometimes earned him the nickname Bob “Vila” and it wasn’t just because of their uncanny beards and flannel. Robert will be remembered much better than these words or accomplishments by the hundreds of people that knew him, loved him, and will miss him. Robert is survived by his two sons, Brayden (and his wife Yumi) and Brock. He is also survived by his sisters (Pat, Betty, and Janet) and special friend, Doris. He was preceded in death by his wife, Loni, parents, brother David and sister Mary. Private services for Robert will be held in the East Side Memorial Cemetery in Estherville.

Robert (Bob) Bringle passed away on October 8th, not long after his 70th birthday, following a lengthy battle with cancer. Robert was born on September 4, 1950 in Estherville, the son of Lubie and Cora (Hutton) Bringle. Robert began his career... View Obituary & Service Information

The family of Robert Bringle created this Life Tributes page to make it easy to share your memories.

Robert (Bob) Bringle passed away on October 8th, not long after...

Send flowers to the Bringle family.