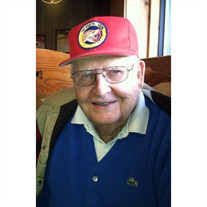 Robert Haas Roseberry, age 93, of Milford, passed away Tuesday, March 17, 2015, at Lakes Regional Healthcare in Spirit Lake. He was born on December 20, 1921, in Le Mars, Iowa, to Clarence DePue Roseberry and Helen Haas Roseberry. Bob graduated from Le Mars High School, Westmar College and the University of Iowa School of Law. In 1976, after practicing law in Le Mars for 30 years, he retired and he and his wife moved to the family home on Lake Okoboji. Bob served as City Attorney for Le Mars and Merrill and served as a Trustee and Attorney for Westmar College. He served as a Trustee of the Presbyterian Church and President of the Board of the Federal Savings and Loan Association in Le Mars. Bob had many interests outside of his law practice. He enjoyed hunting, fishing, carving wood into wildlife and writing about outdoor events. His weekly column, "Far Afield with Bob Roseberry" appeared in the Le Mars Daily Sentinel for many years. During World War II, he served with the Army Air Corps in the Pacific Theater, flying the P51 Mustang on long-range missions from Iwo Jima to Japan. He was awarded the Distinguished Flying Cross, Air Medal with three Oak Leaf Clusters, Purple Heart and three campaign medals. He retired from the USAF Reserve with the rank of Major. Bob is survived by his wife, Marjorie Roseberry of Milford; two children, William Robert (Evelyn) Roseberry of Paonia, Colorado, and Susan Page (Michael) Ewen of Milford; three grandchildren, Scott (Victoria) Ewen of Grayslake, Illinois, Paul Ewen of Milford, and Erica (Jim Heiman) Roseberry of Salida, Colorado; and two great-granddaughters, Addison Paige Ewen and Mackenzie Kay Ewen. A Celebration of Bob's Life will be held at a later date. Memorials may be given in Bob's name to Lakes Regional Hospice. The Schuchert-Lentz Funeral Home is in charge of the arrangements.

The family of Robert Roseberry created this Life Tributes page to make it easy to share your memories.

Send flowers to the Roseberry family.