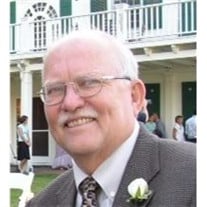 Ronald C. Milfs, age 69, of Laguna Hills, California, passed away May 26, 2014, at UCLA Medical Center in Westwood, California, following complications from major surgery. He was born August 31, 1944, in LeMars, Iowa to Clarence and Jenetta Milfs. Ron started his early education in LeMars. The family then moved to Brookings, South Dakota where he graduated from Brookings High in 1962. He continued his further education at the Automation Institute in Omaha, Nebraska and the University of Nebraska at Omaha, graduating in 1970 with a BS degree in Business Administration. Ron had a long data processing career in various insurance and financial institutions, starting as Programmer, continuing as Senior Programmer/Analyst, Senior Analyst, Director of Programming, and finally retiring as Vice President of Data Processing. He spent six years in the National Guard with active duty at Fort Leonard Wood, Missouri. Ron was a member of the Knights of Columbus at St. Edward the Confessor in Dana Point, California. He volunteered time with the Make-a-Wish Foundation, and enjoyed theatre, symphony, tennis, golf, fishing and skiing. Ron is survived by his wife of 44 years, Audrey Milfs; brother, Dennis Milfs, and his wife, Judy of Quincy, Illinois; brother, Wallace Milfs, and his wife, Cheryl of Indianapolis, Indiana; 12 nieces; 4 nephews, 11 great-nieces, and 9 great-nephews. Visitation will be Tuesday, June 17, 2014, from 4:00 P.M. until 7:00 P.M. with a Vigil for the Deceased at 7:00P.M. at the Schuchert Funeral Home in Spirit Lake, Iowa. Funeral services will be 10:30 A.M., Wednesday, June 18, 2014, at St. Mary's Catholic Church in Spirit Lake. Burial will follow at St. Margaret Cemetery in Spirit Lake. Donations in memory of Ron may be made to Handi-Capable Hands, Inc., 3215 East Thompson Road, Indianapolis, Indiana 46227, or to the American Diabetes Association, 151 Kalmus Drive, Suite C-100, Costa Mesa, CA 92626. Schuchert Funeral Home is in charge of all arrangements.

The family of Ronald C. Milfs created this Life Tributes page to make it easy to share your memories.

Send flowers to the Milfs family.